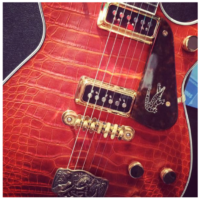 This month, we will continue our modal study by focusing on two essential minor modes, Dorian and Aeolian.

Both of these modes can be looked at as “extensions” of the scale that is used most prominently for soloing in metal, minor pentatonic. A scale well familiar to most rock, blues and metal players, minor pentatonic is a five-note scale, spelled 1 b3 4 5 b7, in terms of its interval structure.

Both the Dorian and Aeolian modes are seven-note scales, and in each case two scale degrees are added to minor pentatonic. Dorian adds the major second (2) and major sixth (6) degrees, resulting in an intervallic structure of 1 2 b3 4 5 6 b7. Aeolian adds the major second and minor, or “flat,” sixth (b6) scale degrees and is spelled 1 2 b3 4 5 b6 b7.

Let’s focus on the Dorian mode first, using the key of G minor. In FIGURES 1–5, I progress through five fretboard positions of G Dorian (G A Bb C D E F), first hitting a G5 power chord in order to strengthen our connection to the key of G.

In FIGURE 1, I ascend and descend through G Dorian in a pattern that spans second and third positions. The intervals/scale degrees are indicated for the first seven notes below the tab. Recite the names of the scale degrees as you play each note, and strive to memorize each note’s intervallic role as well as the order in which they fall.

In FIGURE 2, I move up to the next scale pattern for G Dorian, for which the index finger is rooted at the fifth fret throughout. Likewise, play this scale ascending and descending several times in order to work it into your fret-hand muscle memory as well as to memorize the scale in this position.

For these patterns, I like to use alternate picking throughout when ascending and descending, playing through each slowly so that every note sounds clearly. Once you have the patterns memorized and comfortable under your fingers, increase the speed while keeping your focus on clear articulation and precision with both hands.

The next step is to switch from Dorian to Aeolian, which requires the altering of only one note: the sixth degree of G Dorian, E, moves down one fret, or half step, to Eb. Altering this one note yields the G Aeolian mode (G A Bb C D Eb F), illustrated in five essential fretboard patterns in FIGURES 6–10.