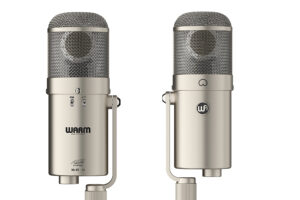 Warm Audio are introducing two exciting new additions to their range of microphones. The WA-47F and WA-CX12 promise to fill further microphone fantasies with these stunning recreations of studio legends.

The WA-47F is a faithful recreation of a high-SPL, low-noise classic, celebrated as a ‘secret weapon’ across world-class studios. The original 47-style FET (Field-Effect-Transistor) was released in 1969 and gained massive popularity inside recording studios for its ability to handle fast transients with exceptional detail. Compared to popular tube microphones, the WA-47F has a more pristine top end and a tighter, more controllable bass response. Artists such as Dave Grohl and Daft Punk were known to use the original 47FET on kick drums which inspired generations of drummers and engineers to do the same. For vocals, artists like David Lee Roth and Michael Stipe used the original to create some of the most beloved music of all time. The WA-47F shares the same sonic profile as that original microphone, making the WA-47F a studio workhorse.

The original C12 is one of the most desirable microphones available. So naturally it is also one of the most expensive and unattainable. Warm Audio decided it was high time the outstanding performance of the C12 was available to the masses. Enter the WA-CX12. With no-compromise components and elite build quality, the WA-CX12 delivers the iconic sound and performance of a legendary piece of equipment.

Stock of WA-47F is expected in late June with WA-CX12 to follow in late July. Contact proaudio@halleonardeurope.com for more information.