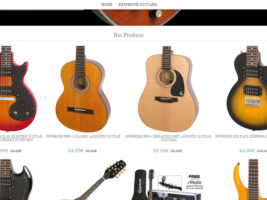 Leading UK retailer Dawsons Music has been the victim of a website cloning scam. On Tuesday 10th October, Facebook users received invitations to a new website, www.epiphonebuy.com offering Epiphone guitars at a fraction of typical prices. With the appearance of a professionally produced retail site, epiphonebuy.com offered a range of Epiphone instruments with Epiphone Les Pauls priced from 34 Euros, Epiphone Pro acoustics from 39 Euros and Casinos at 88 Euros.

Adding to the mystery, on its ‘About us’ page epiphonebuy.com claims to be owned by Dawsons, using a clone of Dawsons’ own ‘About us’ page, even including a black and white image stolen from the Dawsons site showing the UK firm’s original 1898 shop in Warrington. Music Instrument News can confirm that Dawsons has absolutely no connection with the website. 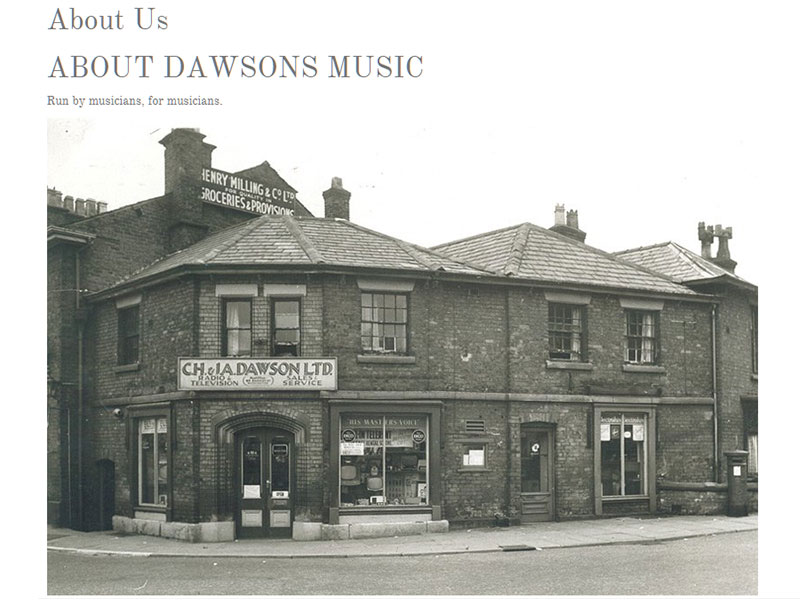 Dawsons’ MD Mark Taylor confirmed to MIN that his company was aware of the cloned site, had immediately confirmed there had been no data breach on its own site but has yet to work out who owns epiphonebuy.com or, mysteriously, what they are trying to achieve – there being no obvious mechanism on the site for credit card scamming or entry into Dawsons’ own site. Nor, Taylor added, was it an affiliate site – Dawsons has no affiliate sites. 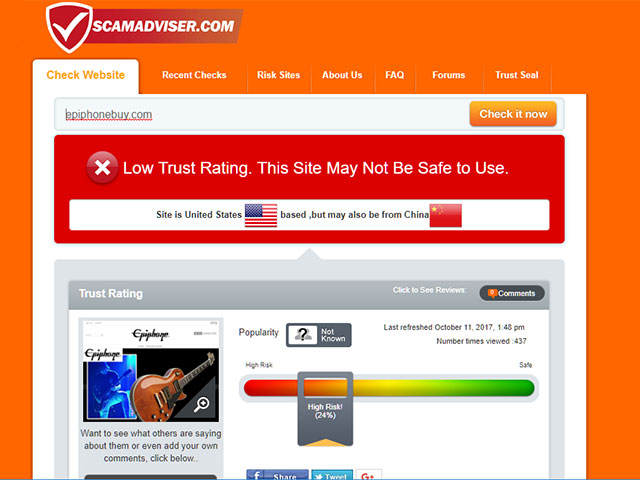 MIN’s online research shows that ephiphonebuy.com purports to be registered by a Marco Martucci, at an address in Anzio, Italy, but gives a contact phone number in the USA.
Watchdog website Scamadviser.com immediately picked up the fake site on 10th, rating it ‘Low’ on its trust score (see screenshot) and suggesting that despite appearing to be US-based (notwithstanding the pretence it was owned by Dawsons in the UK) says it suspects a Chinese connection. Dawsons confirmed it was aware of an Asian link but couldn’t confirm whether China was actually the source of the attempted scam.
The real mystery is that the fake site appears to use a professional online shopping software package and offers prices in Euros, Pounds and US dollars, but does not appear to be requesting credit card details, nor passwords used on other sites, so its purpose remains uncertain. Potentially, prospective buyers could fill in their home address and other details and later be contacted by whoever runs the site for their card details but this cannot be confirmed at present.
A final twist to the story is the issue of the newly implemented restrictions on rosewood. If guitars were actually shipped to customers in the UK it is quite likely they would be impounded if they lacked official certification showing they conformed with the new CITES regulations.
MIN would like to hear from any readers with further information, who have spotted similar activity, or who can throw further light on the subject.

Best fuzz pedals 2020: a guitar effects essential for your pedalboard

11 alternate tunings every guitarist should know