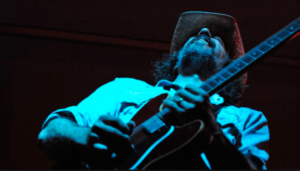 Over the course of the last few columns, we’ve examined both the five-note E major pentatonic (E F# G# B C#) and six-note E major hexatonic (E F# G# A B C#) scales in various positions and patterns/sequences that are formed when traversing up and down individual strings.

Another helpful way to remember the major hexatonic scale formula is to think of it as the major scale with the seventh degree omitted. Utilizing both additive and subtractive approaches will yield different but equally effective results, while also enforcing a more complete and inclusive way of understanding the fretboard.

Last month, I demonstrated the E major hexatonic scale played up and down the B and high E strings individually, and then we combined the patterns by playing both strings simultaneously in harmony, staying diatonic to (within the parameters of) the major hexatonic scale. One of the cool benefits of harmonizing major hexatonic is that there is a natural shift between thirds and fourths as you pair the notes up and down the fretboard, making for a less predicable set of two-note harmonies. Let’s now apply this approach to the D and G strings, as shown in FIGURES 1 and 2.

If we combine both patterns, in two-part harmony, the result is FIGURE 3. As the first four notes of the major hexatonic scale are identical to the first four notes of the major scale, the first four harmonized pairs remain thirds apart, just as they would be if we were harmonizing the major scale in diatonic thirds. The intervallic relationship between the two harmony notes changes to fourths in major hexatonic when you get to the fifth and sixth pairs (B and E, and F# and C#), then reverts back to a third once you reach the octave (E and G#). This “four-and-two” pattern represents the structure of thirds and fourths in major hexatonic.

Once you have the sequence down, try improvising harmonized melodies along the lines of FIGURE 4, wherein I move freely between the pairs in the quest for an implied melodic line. Now let’s apply this approach to the A and D strings together, as shown in FIGURES 5 and 6. Be aware of the same “four-and-two” pattern of thirds and fourth as it lays on this pair of strings, and try using it to improvise some harmonized E major hexatonic melodies of your own.