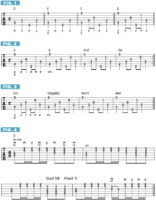 In the decades since his passing on December 8, 1980, John Lennon’s legend has continued to grow, both for his contributions to the Beatles and his accomplishments as a solo artist.

Even so, he is rarely singled out for his acoustic guitar playing. This is perhaps due to the spotlight-grabbing abundance of “stand- alone” acoustic Beatles cuts written by Paul McCartney, such as “Blackbird,” “Yesterday,” “Michelle” and “Mother Nature’s Son.”

But Lennon—wielding his Gibson J-160E or Martin D28—is the man behind many other Beatles acoustic classics, including “Norwegian Wood,” “Julia,” “Happiness Is a Warm Gun” and “Dear Prudence.”

Let’s look at what makes these tracks tick. Lennon used a version of Travis picking, a somewhat country-flavored fingerstyle approach named after session musician Merle Travis, to shape much of his acoustic output.

FIGURES 1a–d deconstruct Lennon’s favorite pattern via an open C chord, beginning with bass notes, to focus on the pick-hand thumb’s activity (FIGURE 1a). With the C chord held down, use your fret-hand’s ring finger to alternately fret C (A string, third fret) and G (low E string, third fret), on beats one and two, respectively. These notes, and the E note at the second fret on the D string (struck “between” each bass note), are plucked with the thumb (p).

As FIGURES 1b–d unfold, one note is added at a time—plucked on the high E string with the ring finger (a), on the G string with the index finger (i) and then on the B string with the middle finger (m)—until the entire pattern is pieced together (see FIGURE 1d). Once you have this pattern down, you’re ready to tackle a host of Lennon’s acoustic Beatles songs, like “Julia” (from The Beatles, a.k.a. the White Album), which informs FIGURE 2. (Note: Lennon used a capo at the second fret on the original.)

Written as an homage to Lennon’s mother, this track features C, G, Am7 and Em chords, each with a high G common tone fretted with the pinkie on the high E string’s third fret. Interestingly, although two of these chords, G and Em, have sixth-string roots, Lennon employs his “fifth-string-root” pattern throughout “Julia.” As a result, instead of hitting the roots of the G and Em chords first, he sounds a different chord tone the moment the chord change occurs. This creates the sound of temporary inversions (chords with a third or fifth in the bass).

“Happiness Is a Warm Gun” (from The Beatles), hinted at in FIGURE 3, also uses this fingerpicking approach—with Em, Em(add2), Am13 and Am7 voicings—as does “Dear Prudence.” While George Harrison’s “Here Comes the Sun” is viewed as the pinnacle of “standalone” acoustic Beatles pick-style tunes, Lennon’s “Norwegian Wood” (from Rubber Soul), which FIGURE 4 approximates, certainly isn’t far behind.

This riff—performed in 6/8 and played with a capo at the second fret on the original—is nestled within an open D chord shape, with the fret-hand’s pinkie and index fingers employed to interject melody notes. Carefully study the string pairs/trios shown in the tablature and pick them using the indicated pick strokes to best bring out the melody.

Steve Vai on his time in Whitesnake: "There was real aggression and control in my playing. I just remember thinking it was never good...

Never lose your Allen key again with the HexHider, a magnetic tool that attaches to your guitar’s headstock

Guitar arpeggios: 8 things you need to know about this pivotal soloing technique