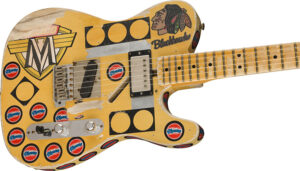 Fender Musical Instruments Corporation (FMIC) today announced the global launch of theLimited Edition Terry Kath Telecaster®, honouring the legendary “Chicago” guitar player’s legacy with a collectible, limited run guitar created by the esteemed Fender Custom Shop. The ‘Shop’ is distinctly honoured to pay tribute to such an acclaimed pioneer by recreatingKath’s custom Telecaster® guitar—which was played throughout his live performances with Chicago and truly embodied the notion of “custom” long before the Fender Custom Shop was founded. Master Builder Dennis Galuszka has replicated the guitar in exacting, every scratch-for-scratch detail, from the Pignose stickers to the gaff-tape-sealed rear body route and every other custom element. With up to 50 units made worldwide, the Limited Edition Terry Kath Telecaster® is a guitar for the ages and a meticulously crafted homage to one of the true guitar greats of our time.

“Terry Kath is one of the most incredible guitar players that ever lived,” said Mike Lewis, Vice President Product Development at Fender Custom Shop. “His iconic playing style paved the way for many guitar players and has inspired other legends through the years. When his daughter, Michelle, told us they wanted to entrust the Fender Custom Shop to recreate Kath’s famed, fan favourite Telecaster® guitar from Chicago, we were honoured. Fan’s had been making their own versions of this guitar for years, but this time master builder Dennis Galuszka replicated every single detail – from the synchronized Strat® guitar tremolo with sawed off Tele bridge plate to other custom elements of the body adorned with stickers and other personalized touches.”

The late Terry Kath has been praised by fans and guitar greats alike for his brilliance as an absolute playing powerhouse. Kath, who Jimi Hendrix once cited as his favourite guitarist, fused sophisticated songwriting ability with his soulful vocals to launch Chicago Transit Authority in 1967. The band shortened its name to Chicago in 1969, achieving worldwide success and 2016 induction into the Rock & Roll Hall of Fame. A consummate innovator, Kath created mind-blowing, never-before-heard guitar tones by experimenting with unorthodox guitar/amp configurations. His instinctive command of his completely original tone is heard on memorable tracks such as “25 or 6 to 4”, “Free Form Guitar”, “Introduction” and others.

“When I was growing up, riding around in my mom’s Pinto with the radio on, I definitely knew Chicago.” Galuszka said. “It wasn’t until later in life, as my appreciation for music became sharper, that I first learned about Terry Kath through guitar friends. From that point on, I was able to hear the music with fresh ears. Who knew one of the all-time greatest guitar players created the soundtrack of my childhood!”

His main axe—the one with which he is most identified, and which accompanied him on the journey to cult status—is a most unusual 1966 Telecaster® guitar, completely customized and plastered with stickers. Kath was so attached to the guitar that he’d buy a seat just for the instrument when traveling by air, rather than entrusting it to airline baggage handlers or even Chicago’s road crew. The Tele® guitar was an amalgamation of highly personalized modifications, including a synchronized Strat® guitar tremolo with a sawed-off Tele® guitar bridge plate, a humbucking neck pickup, custom body routes, a reverse control plate, custom tuning machines and three “wing” string trees. Adorned with Pignose stickers and other intricately placed regalia, the guitar has become legendary in of itself and is synonymous with Kath and his enduring musical legacy.

“This moment has been a long time coming,” said Michelle Kath Sinclair, Terry’s daughter. “When we were making the documentary about my dad (Chicago: The Terry Kath Experience), we didn’t know where the guitar was, so the film almost became a hunt for this Telecaster® guitar. We finally found it at my grandpa’s house; he labelled all of the guitar cases and this one said “Terry’s Favourite.” Finding this guitar meant everything to me, because it feels like I have a piece of him with me that’s so iconic.”

“Bringing the guitar to Fender for the first time was probably one of the most exciting days,” she added. “Going into Dennis’ workspace, I got to see his tools, how the flow works and how they go about the process of making the guitar, which is really cool. He nailed it. My hope for the replicas is that they find really good homes with people who are just as excited as we are about them being in the world. It means a lot to our family.”

The Fender Custom Shop Limited Artist series celebrates the storied guitars of legendary musicians by building recreations of their instruments in exacting detail. Based on close examination of the original guitars, every nuance is noted and incorporated into the build. Reverse-engineering the model, vintage, wood, hardware, electronics, finish and player customizations are all vital to the process. Most importantly, the player’s wear patterns are recorded: every nick, scratch, gouge and bump are vital to the authenticity of the recreation–they are mapped and documented with precision. Learn more about Fender’s first ever tribute to Terry Kath, as his daughter – Michelle Kath Sinclair – recounts her father’s legacy and what it was like working with the Fender Custom Shop on the Limited Edition Terry Kath Telecaster® guitar.

Limited Edition Terry Kath Telecaster® ($20,000 USD, $33,999 AUD, ¥2,463,000 JPY, €20,999 EUR, £17,999 GBP) The Limited Edition Terry Kath Telecaster® is a recreation of the Chicago guitarist’s 1966 Telecaster® guitar, which was his guitar of choice for live performances with the band. Fender Custom Shop Master Builder Dennis Galuszka has replicated the guitar in exacting, every scratch-for-scratch detail, from the Pignose stickers to the gaff-tape-sealed rear body route and every other custom element. The guitar features a heavy relic ‘52 Tele ash body in aged vintage white with a lacquer finish; chrome and nickel hardware; a custom ‘67 Tele maple neck with 21 frets and a 7.25” fretboard radius; a synchronized Strat® guitar tremolo with a sawed-off Tele® guitar bridge plate; as well as Kath’s highly personalized modifications,  including a humbucking neck pickup, a reverse control plate, custom tuning machines and three “wing” string trees. Adorned with Pignose stickers and other intricately placed regalia, the guitar has become legendary in of itself and is synonymous with Kath and his enduring musical legacy.

Since 1946, Fender has revolutionized music and culture as one of the world’s leading musical instrument manufacturers, marketers and distributors. Fender Musical Instruments Corporation (FMIC)–whose portfolio of owned and licensed brands includes Fender®, Squier®, Gretsch® guitars, Jackson®, EVH®, Charvel®, Bigsby® and PreSonus® –follows a player-centric approach to crafting the highest-quality instruments and digital experiences across genres. Since 2015, Fender’s digital arm has introduced a new ecosystem of products and interactive experiences to accompany players at every stage of their musical journey. This includes innovative apps and learning platforms designed to complement Fender guitars, amplifiers, effects pedals, accessories and pro-audio gear, and inspire players through an immersive musical experience. FMIC is dedicated to unlocking the power of musical expression for all players, from beginners to history-making legends. In 2021, Fender celebrated 75 years of giving artists “wings to fly,” carrying on the vision of its founder, Leo Fender, and connecting players through a shared love of music.

Since 1987, the Fender Custom Shop and its esteemed builders have astounded players and collectors worldwide with marvels of creativity, ingenuity and artistry. From its humble Southern California beginnings, the Fender Custom Shop has grown to become the world’s preeminent maker of highly collectible, custom instruments operating in Corona, Calif. Known as the “Dream Factory,” the Fender Custom Shop is also home to an honored group known as the Master Builders – some of the most-skilled luthiers in the world – who craft Fender’s legendary instruments and push the boundaries of possibility. The distinguished Master Builders make dream guitars a reality for players – from Eric Clapton, Jeff Beck, H.E.R. and Jimmy Page to collectors, working professionals and guitar enthusiasts. As the epicenter of innovation at Fender and the pinnacle of the brand, ideas and production techniques devised in the Fender Custom Shop for both Masterbuilt and Teambuilt guitars go on to inspire and influence Fender’s other production line models.

Chibson’s absurd four-foot whammy bar is real, and you'll be surprised just how good it is

Eric Clapton, George Harrison and the Beatles: a guide to nearly 50 years' worth of studio collaborations

Rufus Philpot: “The first time I heard Level 42's The Chinese Way on the radio, I couldn’t believe someone could play bass that fast...