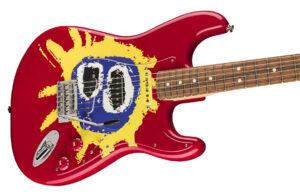 Fender have officially launched a 30th Anniversary Screamadelica Stratocaster® in Fender’s first ever official collaboration with the legendary Primal Scream.

On the partnership, Justin Norvell, EVP Fender Product said: “Screamadelica is part of the fabric of modern rock – it is an honour to create this limited run of commemorative guitars which play just as impressive as they look. This model is packed full of great features – including Alnico V pickups for those crystal clear highs and warm lows – and I can’t wait to see what players around the world create with this guitar.”