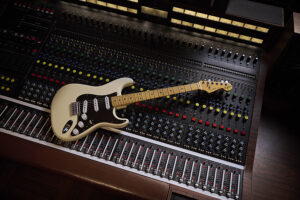 Fender Musical Instruments Corporation (FMIC) today announces the launch of the Nile Rodgers “Hitmaker” Stratocaster guitar, a collaboration with the three-time Grammy winner, a Rock and Roll Hall of Fame inductee and a living legend of modern music with unfathomable cultural impact. This Fender® Artist Signature Series release honors both Nile and the iconic guitar he used to write, produce and/or perform on countless hits for the likes of: David Bowie, Diana Ross, Madonna, Daft Punk, Duran Duran, The B-52’s, Stevie Ray Vaughan, Daddy Yankee, Robert Plant / The Honeydrippers, Jeff Beck, The Vaughan Brothers, Lady Gaga, Sister Sledge, INXS, Sam Smith and many more. Later this spring, fans around the world can also learn to play the culture-defining songs Rodgers produced, wrote or played guitar on via Fender Play®, Fender’s complete online learning app for guitar, bass and ukulele. The Nile Rodgers collection will include words of advice from Rodgers himself, insight into his collaborative, creative process and individual video lessons for hits like “Good Times” and “Le Freak” (Chic); “I’m Coming Out” and “Upside Down” (Diana Ross); “Like A Virgin” and “Material Girl” (Madonna) when selecting the Pop path.

Throughout his incredible career there has been one essential element: his white 1960 Fender Stratocaster® guitar. This Strat® guitar became known as the “Hitmaker” after Nile used his guitar’s bright, energetic sound to write countless chart-toppers. For decades, Nile has maintained that the Hitmaker has a unique sound all its own. After working closely with Fender to ensure a faithful recreation, the Nile Rodgers “Hitmaker” Stratocaster® guitar will enable players everywhere to experience one of the most ubiquitous guitars in recorded music. This Stratocaster is a true vintage rarity, a unique instrument and became an essential ingredient in Nile’s extraordinary rhythm tones.Watch as Nile plays through some of his top hits and dives into the story behind his iconic guitar.

“I’ve heard people say the Hitmaker is a $2 billion dollar guitar,” said Nile Rodgers. “When playing it, I’ve been a part of making some of the biggest-selling records of all time: David Bowie, Chic, Diana Ross, Daft Punk, Madonna and so many others. All I know is that it’s been my constant companion for almost fifty years. I can’t stop myself from playing it for hours each and every day. I’m therefore thrilled that now almost anyone can buy their own Hitmaker. Fender really got it right and focused on every little detail that made the original special. It’s going to be surreal to hear that unique sound on a record I didn’t make.”

After buying the Hitmaker at a small music shop in Miami in 1973, Nile used the guitar to create songs that have defined a multitude of genres, decades, movements and generations. It’s heard on the classic disco-era records “Everybody Dance”, “Le Freak” (the biggest selling single in Atlantic Records history!), “He’s The Greatest Dancer” and “Good Times”. The latter is one of the most sampled songs of all time and arguably gave birth to Hip Hop through the iconic “Rapper’s Delight,” many of which have been designated as “culturally significant” and selected for preservation by the Library of Congress. The latter of these songs is credited with bringing rap music to mainstream audiences, embedding the Hitmaker into the DNA of hip-hop and rap. Rodgers paved the way for further integration of guitar in rap and hip-hop music, and that influence lives on – as seen in the recent Super Bowl LVI halftime show – as more artists, producers and creators in those genres use guitar as a sonic paintbrush. To this day, Nile’s guitar is one of the most-sampled sounds in the Rap genre, heard on hits from the Notorious B.I.G., Nas, Snoop Dogg, Rick Ross, A Tribe Called Quest, Will Smith, LL Cool J, and Slick Rick amongst many others. Nile’s peerless reputation as a producer, songwriter and guitarist made him the one to call when a major artist needed a hit record. David Bowie did so to create the Billboard #1 “Let’s Dance” in 1983. 30 years later Daft Punk would tap Nile for the Billboard #1 “Get Lucky.” The Hitmaker is heard on both of these records and virtually all of Nile’s best-known projects.

A number of features make the Hitmaker truly unique. It has the body of a 1960s Stratocaster® guitar but the neck of a 1959 model. Its hardtail bridge gives it beautiful resonance and the guitar’s mirrored pickguard reflects stage lights beautifully. When played in Nile’s signature “chucking” style, the sound of this guitar became an essential component of Nile’s world-famous songwriting. Fender worked closely with Rodgers to study the original Hitmaker and design a meticulous recreation of the original guitar.

“The Hitmaker Stratocaster® guitar is the epitome of what Fender’s Artist Signature Series is capable of,” said Justin Norvell, Executive Vice President of Product, FMIC. “These projects celebrate both guitar and artist, but in this instance, Nile and his Hitmaker are inseparable from each other. With that in mind, we had to nail every last detail: from the finish to the custom pickups, down to the bent-steel saddles that made his tone so bright and crisp. We’re grateful that Nile is letting us put such a revered piece of music history out into the world.”