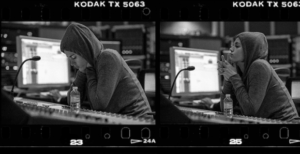 ‘Find a way to mess it up’: producer Jenn Decilveo on understanding your audio gear

Grammy-nominated producer and songwriter Jenn Decilveo spoke to us about the importance of mastering your technique, how the production scene is changing and her journey to get to where she is today…

On our transatlantic phone call to LA-based producer and songwriter Jenn Decilveo, the one thing she’s really dying to talk about is the amazing production talent coming from Europe at the moment.

Frequently flying over to London to work with emerging pop artists and studio stalwarts in the capital, she’s full of praise for the Music Producers’ Guild’s most recent award winners – especially the record number of women taking home prizes this year (Catherine Marks won Producer of the Year, with another four women receiving prestigious accolades).

A similar title could soon be heading her way, as Decilveo’s songwriting ability and instinctive production prowess leads her to work with pop’s most streamed artists, including British pop singer Anne-Marie, whose long-awaited debut album Speak Your Mind – which Decilveo partly produced – was released last month.

Although she only moved to LA to pursue a career in the music industry within the past decade, the New Jersey native’s roster of artists is already seriously impressive. Having written with the likes of Beth Ditto, Albert Hammond Jr of the Strokes, Bat for Lashes’ Natasha Khan and the aforementioned Anne-Marie, her songwriting and production credits are showing up more and more frequently in the pop landscape. Her work on Anne-Marie’s debut saw Decilveo work with award-winning producer Fraser T Smith and another MPG 2018 award winner, Recording Engineer of the Year Manon Grandjean.

But back to the States. Almost a decade ago, after quitting a job in finance (“It’s a great profession for some people – I was miserable”), Decilveo started interning at a studio in Manhattan. Initially working on the business side of things, an engineer at the studio began teaching her about recording, which piqued her interest in production. A job at a booking agency followed, which led her to make contacts that prompted her to move to LA in 2009. “It’s kind of scary to actually take the plunge when you’re used to a paycheck and benefits. But I did, and I’m still here in 2018.”

In those nine years, Decilveo says she’s seen the music business change in that more people than ever have the ability to make music from their bedrooms. “I think there are fewer barriers to entry, but I find that a lot of music is homogenous these days. Engineering and mixing to me has become essential to production. I feel like you need to really understand the gear or the plugins to make it sound decent.”

This appreciation for technique led Decilveo to hone her recording skills four years ago. She says: “I wish I’d been obsessed with recording when I was 10 because I think the best producers need to know what gear to use and how to mix something properly in production, as well as having [musical] ideas in their brain.

“Production now, at least in the stuff that I do, is very close to being finished when a demo’s turned in. It’s 70% there. The quality is enhanced when you have good ingredients, like good synths, good preamps, good compressors and good pedal delays. It’s all about choice of the gear after the ideas are there, and you have to know what you’re doing, mix-wise and in terms of engineering, to make it sound tight.”

When in LA, Decilveo works mostly from her studio which she affectionately calls The Pineapple Box, featuring her “trusty” analogue synth LA-2A.

“I’m an obsessor of synths,” she continues. “Recently, I met a guy in London who made me look like an amateur, with synths in the entire room, from floor to ceiling. He started to talk about it in a way that’s so advanced, just next-level conversation. He said, I hate presets – you’re not a producer if you use presets. I don’t necessarily know if that’s right. But he’s correct in that if you use the same sound that’s available to everybody, that means you have to find a way to fuck it up, otherwise it sounds the same as everyone else who’s using it. There’s something to be said about making it your own. There’s a chance that everyone’s using the same synths, the same waves, and you’re going to hear that. Everyone should mess it up – it gives the producer an identity.

“Because of that music, everyone’s using the same over compressed high-end vocals,” she continues. “If you listen back to a Fiona Apple record, for example, you can hear the intricacies of her voice because it was treated differently. I think that adds character to a song or a record. Everything from the choice of the drum kit or the guitar or the amp or the player makes a difference.

“I’m definitely playing catch up on mixing, though. I’ve had Michael Brauer mix records of mine, as well as Phil Tan and Geoff Swan. I want to get the song as far to done as possible, and then the mixer comes on board and makes it really incredible. With Brauer, who I worked with on Beth Ditto’s [2017 album] Fake Sugar, he just ran the music through stuff and warmed it all up. As a producer you need to get as far along as possible with that mindset before it even gets to the mixer. It’s different now with everyone to able to make music – it’s not ‘plug and play’ recording anymore.

Decilveo’s work on Anne-Marie’s debut is a clear indicator of just how many people are involved with creating a pop record in the 2010s. Rather than overseeing the entire record, working with an artist on each track, Decilveo represents a new era of producers who are called in for their different talents on each song, often with the main aim of making the next big hit.

Anne-Marie has a huge following in pop after vocal features on No. 1 hits including Rockabye by Clean Bandit. Decilveo met her in March 2016, when they began working on her debut which ended up being almost two years in the making. She says: “Straight off the bat I liked her personality. I was like, Huh, you’re interesting and you can sing. Oh, and you have an opinion. And we’ve been working together ever since. Whenever she’s in LA or I’m in London we get together and write. I would probably say if I could count on my hand the artists that I’ve met in the last decade that I want to write songs with for the rest of my life, one of them would be her. We just work very well together.”

As well as the Anne-Marie record, Decilveo has just finished producing albums for Bibi Bourelly, Bat for Lashes and Demo Taped. In 2016, Cheers To The Fall, an album she produced with American singer Andra Day, was nominated for a Grammy. Who else does she dream of working with? “Adele, obviously. Pink. Miley Cyrus. I’d love to work with FKA Twiggs. Oh, and Bjork.”

As our conversation draws to a close, the chat turns to some of the great work being done by other producers doing big things in the biz right now, and it’s clear she’s passionate about supporting other women in the industry.

“I wish I had a girl to talk to about production when I was younger as sometimes the technical language and jargon [within production] can be a bit scary. I was talking about compression to an artist the other day and she didn’t understand it until I explained it properly, like really broke it down for her. I think women communicate differently.” So, what advice would she give to a young woman starting out in the business now?

“Big picture, non-technical, human advice would be to stay the course. There are no hand-outs. But if you’re passionate and love what you do and do it for the right reasons, you can take it. You’ve just got to stay the course, there’s lots of ups and downs.” And technically? “Start early. Do your 10,000 hours. Become a master at your craft.”