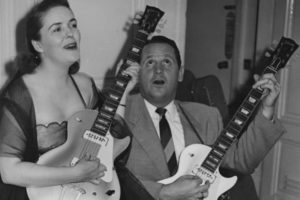 Les Paul—guitarist, songwriter, luthier, inventor and pioneer of the solid-body electric—was a mainstay in the guitar world during his lengthy career.

In the first half of the 1950s, though, the musical team of Les and his wife Mary Ford wasn’t only known in guitar circles; they actually were two of the biggest names in music.

At the height of their fame, Paul and Ford made an appearance on the NBC’s The Colgate Comedy Hour, which originally aired in March 1954.

In the clip below, which is taken from their performance that night, the hit-making couple (each with a Goldtop Gibson Les Paul just two years after its introduction) have a tongue-in-cheek guitar battle that doesn’t end so well for Les.

Jonathan Graham is an ACM UK graduate based in London studying under the likes of Guthrie Govan and Pete Friesen. He is the creator of ForgottenGuitar.com, a classic-guitar media website, and is completing his debut album, Protagonist, due for release in 2016. Updates also can be found at Graham’s YouTube channel.