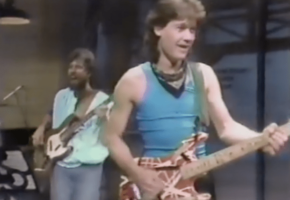 Following the release of Van Halen’s 1984 album, and amid breakup rumors stemming from an April Fool’s Day joke initiated by the band, Eddie Van Halen stopped by to jam with David Letterman’s house band twice in the space of a couple of months.

However, the truly special moment occurred June 27, 1985. That’s when Eddie returned to the show (which included his then-wife, Valerie Bertinelli, as a guest) to perform a full-length instrumental version of “Panama” with Letterman’s Paul Shaffer-led house band.

In the days before DVRs, this was must-see TV. Thankfully, we can relive that unique performance as many times as we want today.

Jonathan Graham is an ACM UK graduate based in London studying under the likes of Guthrie Govan and Pete Friesen. He is the creator of the Forgotten Guitar Facebook page, a classic-guitar media website, and is completing his debut album, Protagonist, due for release in 2016. Updates also can be found at Graham’s YouTube channel.