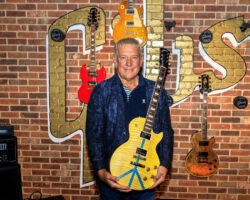 Gibson, the iconic American-made instrument brand, and Gibson Gives its philanthropic arm are bringing the music community together to stand behind the Ukraine Relief effort, raising awareness and funds to aid the people of Ukraine.

Bidding is now LIVE in person, and online Friday, Nov. 11, Saturday, Nov. 12, and onSunday, Nov. 13, for the Gibson “Guitars For Peace” Ukraine relief guitars and autograph books as part of Julien’s Auctions Icons & Idols: Rock ‘N’ Roll” live auction at the Hard Rock Café in New York (1501 Broadway-Times Square NY, NY 10036). Registration is required to bid in the Gibson “Guitars For Peace” live auction and can be done online before the sale at the JuliensAuctions.com Registration page to bid by phone, proxy or online HERE to bid live online, or by calling (310) 836-1818.

The Gibson Gives “Guitars For Peace” Ukraine relief guitars feature the colors of the Ukrainian flag, which is a worldwide symbol of international solidarity for the freedom, democracy, and independence of the Ukrainian people. The Azure Blue color on top signifies Ukraine’s vast blue skies, while the Gold below denotes the massive fields of grain that cover three-quarters of the country; the flag of Ukraine represents its role as the breadbasket of Europe. A strong symbol of pride, the Ukrainian flag was created in 1848 and has flown high as the national flag of Ukraine for over 30 years since Ukraine achieved its independence.

“I’m happy to auction this beautiful guitar of mine to benefit the fine people of Ukraine,” says Paul McCartney.  “Hopefully it will help them through this aggressive Russian invasion.”

“It is an honor to represent the brave sovereign state of Ukraine,” says SLASH. “I’m proud to support them during this conflict.”

“Once again, Gibson Gives rises to the occasion!” says Alex Lifeson of RUSH. “I’m proud to count myself in as a supporter of the Guitars For Peace initiative in aid of the people of Ukraine.”

“It’s been heartbreaking to watch the innocent people of Ukraine in such turmoil,” adds Lzzy Hale of Halestorm. “I’m so proud of my Gibson family for stepping up to provide a bit of hope to our fellow humans.”

“For many centuries, music has always played a pivotal role in uniting communities and countries, especially during times of conflict,” says James “JC” Curleigh, President and CEO of Gibson Brands. “Despite the dark circumstances, we stand by our amazing artists with our support to launch ‘Guitars for Peace,’ and to envision a better future for Ukraine and its citizens.”

Gibson Gives works extensively with other non-profits in a 360 degree way, raising the funds, awareness and resources they need the most right now. Gibson Gives partners include MusiCares, The Recording Academy (GRAMMY’s), Save The Music (Gibson launched 15 scholarships for graduating High School seniors), Metro Nashville Public Schools (Gibson donated over $300,000 in gear to outfit school music programs), National Museum of African American Music (Gibson donated proceeds from a charitable auction with Gibson artist Darius Rucker), Guitars For Vets (helping U.S. military veterans with PTSD), Apollo Theater (“Let’s Stay In Together” Concert Event), Women Who Rock (breast cancer research at Magee Women’s Research Institute), Ryan Seacrest Foundation (placed Gibson instruments and KRK studio gear in all of their U.S. hospitals for pediatric patients and offering them music-making lessons to cope with illness), JoyRxMusic® Children’s Cancer Association (arranged music lessons for hospitalized kids and teens facing cancer and serious illness) and the Do it for the Love’ Foundation (a wish-granting non-profit organization for people living with life-threatening illnesses). Gibson Gives became the exclusive stringed instrument provider for the Nashville based non-profit Musicians On Call (who arrange in-room and virtual performances by superstar artists with hospital patients) and donated high-value guitars for auction to support the Teenage Cancer Trust (London, U.K.). Since re-launching in 2019, Gibson Gives has raised over $3.5 million dollars worldwidethrough its mission to support non-profit organizations in their efforts to advance musicians, youth-focused education, and wellness initiatives. 100% of all donations to and from Gibson Gives–a 501(c)(3) organization–go towards giving the gift of music.Gibson Gives is changing lives…one guitar at a time. For more information, visit: www.gibsongives.org.

Gibson, the leading iconic guitar brand, has shaped the sounds of generations of musicians and music lovers across genres for 128 years. Founded in 1894 and headquartered in Nashville, Gibson Brands has a legacy of world-class craftsmanship, legendary music partnerships, and progressive product evolution that is unrivaled among musical instrument companies. The Gibson Brands portfolio includes Gibson, the leading guitar brand, as well as many of the most beloved and recognizable music brands, including Epiphone, which has been on every stage since 1873, Kramer, the original MADE TO ROCK HARD guitar brand, MESA/Boogie, the home of tone, and KRK, behind great music for over 30 years, and Maestro, the founder of effect pedals. Gibson Brandsis dedicated to quality, innovation, and sound excellence so that music lovers for generations to come will continue to experience music shaped by Gibson Brands. Experience more at Gibson.com and on Instagram, Twitter, Facebook, Gibson App,Gibson Garage, and Gibson TV.