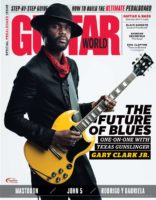 He heads out on tour on May 2. Visit GaryClarkJr.com for tour dates and locations.