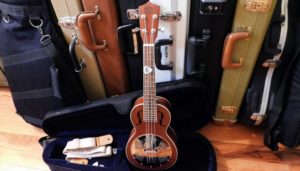 Jimi Hendrix, Eric Clapton and George Harrison all did it, so why can’t I? After a quick Google search, I found out that Marilyn Monroe and Dwayne The Rock Johnson did too. What’s that? They all played ukulele.

Sound Smith and I were in the middle of setting up a review for one of their new acoustic guitars, but when stock was limited they asked, “Any interest in a resonator ukulele?” I said, “Sure!”

Before this I hadn’t played much ukulele, but since being a working guitarist in this era sometimes means being your own tech, studio bassist and travel agent, why not add some ukulele skills to that list?

A resonator ukulele has the same goal as a resonator guitar; volume! Instead of a soundhole like you’d see on an acoustic, a resonator catches the string’s vibrations from the bridge and reflects them off a metal disc like a speaker.

The resonator cover is chrome-plated brass with a walnut biscuit and a maple bridge saddle. The 17-fret neck features a walnut fretboard and the body is made with mahogany for the top, back and sides. It ships in a generously padded soft case and comes with Aquila strings.

While the Resonator Ukulele is imported, it’s inspected by Sound Smith’s luthier before it leaves Bend, Oregon. I’ve been skeptical of other companies that claim a luthier inspection, but in this case, the fret ends were smooth, the action was comfortable and the cream binding and satin finish looked great all around!

After a couple minutes a day of studying chord charts and watching YouTube lessons over a few weeks, here’s my ukulele debut. For the sound clips, I used a Shure PG27 large diaphragm condenser microphone about a foot back positioned halfway between the neck and the bridge of the ukulele.

Clip One: Here are some chords strummed first with a Fender Medium celluloid pick, followed by the same chord pattern played using the nail of my index finger. While the pick is brighter and easier to get a consistent sound, you can hear more of the resonator’s tone when played with fingers.

Clip Two: To demonstrate some single note playing, here’s a 12-bar blues that I fingerpicked until the end, when I strummed using my index finger.

For more on the Sound Smith Resonator Ukulele ($249), head on over to soundsmithegear.com.