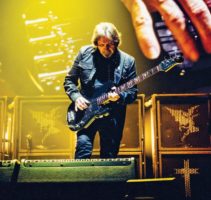 From Led Zeppelin’s John Paul Jones to the Who’s John Entwistle, bass players are often cast as the strong, silent types. That seems to be especially true of Terence Michael Joseph “Geezer” Butler, who has been described as “quiet and reclusive” by no less than longtime bandmate and friend, Tony Iommi.

Reserved, yes, but as Black Sabbath’s primary lyricist and bassist, he’s had plenty to say. As a musician, his gigantic sound and nimble fret work has practically defined heavy metal, earning praise from virtuosos like Les Claypool, Pantera’s Rex Brown and Dream Theater’s John Myung. And as Black Sabbath’s wordsmith, he spoke volumes via frontman Ozzy Osbourne. His unvarnished assessments of war, drug abuse and mental illness paved the way for a whole new way of writing music, and were light years from the hippie platitudes that were popular during the band’s early years.

In 1970, the year Black Sabbath released their first album and Paranoid, the charts were filled with the soft rock of Simon & Garfunkel, James Taylor and Crosby, Stills, Nash & Young. One can only imagine what the world made of Butler-penned lyrics like “Push the needle in/Face death’s sickly grin/Holes are in your skin/ Caused by deadly pins.”

Songs like “Paranoid” and “Iron Man” were shockingly modern, direct and ahead of their time. Part of the fun of the new Black Sabbath live DVD The End of the End is getting one last opportunity to hear the great riffs and marvel at Butler’s sharp observations one more time.

I was eager to chat with the bassist about the band’s last show and his visionary lyrics, but there was that “strong, silent” thing to contend with. These days, Butler prefers to be interviewed via email. The following is our rather concise correspondence.

For our complete interview with Iommi (our January 2018 cover story), head here.

Were you happy with how the concert film came out, and were you satisfied with the band’s performance? I was quite happy with the concert film. I would’ve been happier if “N.I.B.,” complete with the bass solo, was included in the cinema version, but the powers that be decided to go without it. It’ll be included on the DVD, though.

Is there a musical highlight for you? Not really a highlight. I thought each song had its own dynamic. But I think “War Pigs” is always a good example of the band’s chemistry. The solos in it are quite tricky to play, bass-wise. I have to be spot-on with my timing.

What was the day of the final performance—February 4, 2017—with the band like for you? It was a day like any other. I didn’t want to overthink things, so I just looked at it as a normal gig, otherwise I would’ve been a nervous wreck.

Did you take any special care in choosing the set? We didn’t change anything from the set we’d been playing on the rest of the tour. We built much of the set around the Paranoid album. That’s our most successful album, and it was what people wanted to hear.

What songs will you miss playing with the band? I’ll miss playing all the songs. I would’ve been happy to continue touring, but I suppose everything must end sooner or later. And it was appropriate for us to bow out at the top.

Are you surprised at the longevity of heavy metal? I’m not surprised at all. There are so many different versions of metal now that there’s something to please everyone. And the standard of musicianship is generally very high across the board.

It could be argued that Black Sabbath created as many new musical conventions as Muddy Waters or the Beatles. Do you allow yourself that pat on the back, and place in music history? Well, for so long we were written off as unimportant, particularly in the Seventies, and especially in the music press. But we stuck to our vision and carried on regardless of what the critics thought of us. We had the most loyal fans, and that’s who we really cared about. However, when we wrote our music, we did it to please ourselves, not what was expected of us, so we had a lot of light and shade on our albums.

Lyrically, your unflinching and unsentimental view of the world was very daring and new in the Seventies. Which songs represented a breakthrough for you and your writing and why? I suppose the lyrics to “Paranoid” were the most representative of a breakthrough, as they were very personal. I had been suffering from undiagnosed depression, and the only way of dealing with it was to write about it. It was quite cathartic.

Did the way the band sounded push your writing into these areas, or would you have written that way regardless? The sound absolutely dictated the lyrics. Songs like “Changes” and “Planet Caravan” called for softer ideas, while “War Pigs” and “Into the Void” suggested a more aggressive approach.

What would you like the world to know about Tony Iommi and Ozzy Osbourne? Tony is the most patient person when it comes to music. He knows exactly when a song is ready for human consumption, and he’ll keep adjusting the music until he finds it right. Ozzy is brilliant at coming up with vocal melodies, no matter how weird the music gets.

You have a very intimate musical relationship with Tony. What did you enjoy most about performing and recording with him for all these years? What impresses you about him as a musician? He is the finest guitarist, bar none. He puts his heart and soul into every note of his music. It’s very inspirational. It’s always a great honor when he compliments me on my bass playing, and he always trusts me to come up with the most appropriate parts. He’s great to work with and he brings out the best in anyone he plays with.

Future plans? At this moment I’m enjoying my retirement. I’m traveling the world in a leisurely way and doing stuff I haven’t had time for in the past 50 years. I will eventually write more music, just to keep my mind busy, and if I write anything suitable for release, then I will release an album. But I’ll always write music, regardless. It’s what I do.