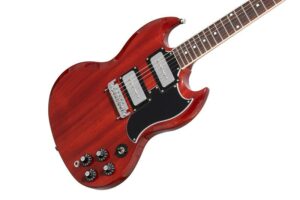 Gibson is proud to take the next step in the partnership with legendary guitarist of Black Sabbath, Tony Iommi and launch the Tony Iommi SG Special from Gibson USA, a new and exciting version of his beloved SG guitar which helped shape the start of Heavy Metal. The Gibson Tony Iommi SG Special is now available worldwide on www.Gibson.com.

Tony Iommi’s iconic riffs, heavy tones, and massively influential albums created the blueprint for heavy metal and many other genres to follow. After an early accident that almost ended his career as a guitarist, Tony persevered to become universally loved and revered. And while Tony’s innovative tuning and playing styles have always been a major part of his monstrous tones, his original, heavily–modified 1964 Gibson SG Special, nick-named “Monkey” was at the center of it all.