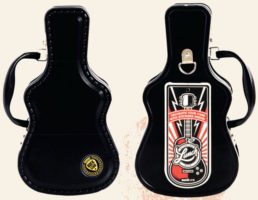 Suck UK Guitar Case Lunch Box As every good parent knows, the most important meal of the day is the one that gets lugged around in a guitar-case-shaped lunch box! These tin wonders measure 6.1 x 3.2 x 11.2 inches, meaning there’s plenty of room for a sandwich, a pair of pears and, if your kid is a picky eater, a mess of guitar picks. It comes with 10 stickers so kids can make their lunch box look like that well-traveled, highly decorated Gibson ES-335 case in the attic. Of course, these babies aren’t just for kids! $20, suck.uk.com

Vox Amplification AC2 Rhythm Guitar Amp We love tiny desktop amps because they look cool and are perfect when you just want to plug and play, but—truth be told—they’re a bit limited in sound capability. The Vox Amplification AC2 Rhythm aims to change that by packing a boatload of features and huge sounds into a mini battery-powered, two-watt amp. It’s hard to believe the AC2 Rhythm comes with three channels (clean, crunch and lead), three effects (chorus, delay and reverb), gain, tone and volume controls, plus 81 rhythm patterns for on-the-go practicing. You now have no excuse to not keep your chops up to speed. $59.99, voxamps.com

Fender Paramount PM-TE Travel When temperatures begin to drop, a vacation someplace warm sounds like a great idea, and one thing we’ll be packing is the Fender Paramount PM-TE Travel guitar. The Para­mount Travel is a highly responsive 14-fret acoustic that’s lightweight, resonant and designed for portability. The guitar features an open-pore finish (in all solid mahogany or solid mahogany with a spruce top) with a relaxed string tension that makes it easier to play notes and chords along the entire length of the neck. The Paramount Travel comes with a Fishman-designed PM preamp voiced specifically for this guitar, an ovangkol fingerboard and bridge and ebony bridge pins, along with a bone nut and saddle. $699, fender.com

My Guitar Is a CameraIn 1970, Watt M. Casey Jr. stood just a few feet from Jimi Hendrix as the guitar god performed in San Antonio—but he didn’t have a camera to prove it. He vowed that’d never hap­pen again. My Guitar Is a Camera, his new book (Texas A&M University Press), shows that he made good on that promise. It’s packed with 194 photos of artists who passed through Texas in the Seventies, including local boy Stevie Ray Vaughan. You’ll also find Eric Clapton, George Harrison, Muddy Waters, Elvis Costello, the Stones, the Dead, Albert and B.B. King, Dylan, Frampton and more. It includes recollections from eyewitnesses and a foreword by Steve Miller. $35, tamupress.com

DiMarzio PAF 59 Neck and Bridge Pickups We’ve had the privilege to get our hands on some original 1959 sunburst Les Pauls here at GW. However, of the ones we’ve played, it was always Larry DiMarzio’s 1959 cherry sunburst Les Paul that stood out above the rest. The reason? Its original “Patent Applied For” pickups, which produce syrupy-sweet tones that are nothing short of mythical. For the new DiMar­zio PAF 59 Neck (DP274CR) and Bridge (DP275CR) hum-canceling pickups, DiMarzio used that same ’59 Les Paul for reference, as well as some of the same materials and pickup-winding know-how to recreate its magical tones. With the DiMarzio PAF 59 Neck and Bridge pickups, you’ll get the same open dynamics, bright attack, smooth midrange, rich bottom end and the creamy distortion of the original “Patent Applied For” pickups at less than half the cost. $129.99 each, dimarzio.com

The British Amp Invasion: How Marshall, Hiwatt, Vox and More Changed the Sound of Music If you love valves, knobs, speakers, cabinets and music history, you’ll appreciate amp expert Dave Hunter’s latest masterfully researched tome from Backbeat Books. The book, an ode to British amps (not to mention the people who created, crafted and cranked them up), explains how U.K. amp manufacturers—from Selmer to Vox to Hiwatt to Marshall to Orange—helped define the sound of rock. It also charts the confluence of British ingenuity and pop culture as it evolved at breakneck speed. $29.99, backwingstore.com

Option Knob WingMan Ever wanted to adjust a knob on your stompbox midway through a solo but couldn’t because you didn’t have a free hand? Looks like you need a WingMan, son—as in the WingMan Effects Pedal Foot Controller. It’s a clever effect-pedal foot con­troller/accessory that allows you to instantly change parame­ters on your pedal’s control knob using your feet. The WingMan replaces any factory knob with two shaft inserts enabling it to fit classic and boutique-style pedals. The WingMan also glows in the dark and has a more compact wing design, giving it a smaller footprint on your pedalboard. $9.95, wingmanfx.com

Ultimate Ears Pro Sound Tap Personal Monitoring System Using in-ear monitors on stage can be intimidating, due to the multiple systems needed for an ideal mix. UE Pro solves that problem by making personal stage monitoring simple with Sound Tap, a compact stage accessory that plugs directly into any on-stage speaker and taps into the sound mix, passing sound through without impacting the system. Musicians can plug in their custom or universal in-ear monitors and turn the existing stage monitor mix into an in-ear mix. UE Pro Sound Tap has been designed to work with many systems, such as stage wedges, side fills and more, and supports line-level and speaker-level inputs. $249, pro.ultimateears.com

Gretsch G5435TG Limited Edi­tion Electromatic Pro Jet with Bigsby and Gold Hardware Players who love the look, sound and feel of Gretsch guitars often have found that the prices can be slightly out of reach. Thankfully, Gretsch’s new Electromatic models will change that perception with the launch of the more affordable G5435TG Limited Edition Electromatic Pro Jet with Bigsby and Gold Hardware. It comes in a vivid candy apple red fin­ish and features a chambered bass­wood body and arched maple top along with dual Black Top Filter’Tron humbucking pickups. Other features include a rosewood fingerboard with 22 medium jumbo frets and pearloid Neo-Classic thumbnail inlays, three-position pickup toggle switch and Bigsby B50 tailpiece. $849, gretschguitars.com

Danelectro Billionaire Pride of Texas Despite its expensive-sounding name, the Billionaire Pride of Texas is an affordable overdrive that lets you dial in famously fat tones associated with Texas-bred players like Stevie Ray Vaughan. The pedal, which comes with sample settings to get you started (including “Texas Twang,” “Beefy Blues” and “Soaring Solo”), fattens up your signal without losing clarity; it also adds push and fatness to single-coils or humbuckers. Best of all, it’s not a Tube Screamer or Klon clone; it has a unique vibe and serious intensity—and its swanky Art Deco aesthetics don’t hurt. $79, danelectro.com

Jim Dunlop 2017 Authentic Hendrix Series Remember those old TV ads that urged you to “Collect all five!”? Well, you finally have a good excuse to give in to “gear pressure.” Dunlop has issued its special-edition run of Jimi Hendrix’s favorite effects in a compact, pedalboard-friendly form. The pedals feature iconic artwork from legendary rock photographer Gered Mankowitz. The series includes the Jimi Hendrix Fuzz Face Distortion, the Gypsy Fuzz, the Octavio Fuzz, the Uni-Vibe Chorus/Vibrato and the Jimi Hendrix Cry Baby Mini Wah. Disclaimer: Jimi Hendrix talent not included. $129.99 each, jimdunlop.com

The Eagles—Hotel California: 40th Anniversary (Deluxe Edition) Hotel California was huge when it came out in December 1976. It topped the U.S. charts for eight weeks, won two Grammys and sold more than 32 million copies. Now it’s back, and it’s bigger than ever. A new Deluxe 40th Anniversary version comes in a two-CD/one- Blu-ray Audio package with remastered sound, previously unreleased live recordings, and hi-res stereo and 5.1 mixes. The live material is from the band’s three-night stand at the Los Angeles Forum in October 1976 and features one of the first performanes of “Hotel California.” $99.98, eagles.com

Fluid Audio Strum BuddyThis handy item is guaranteed to a turn a couch potato into a six-string bean. The Strum Buddy is a six-watt, rechargeable-battery-operated amp that sticks to your guitar, courtesy of a suction cup that doesn’t damage your ax’s finish. Best of all, it has onboard effects—distortion, chorus and reverb—that’ll help give your living-room noodling some authority. Of course, you’re not restricted to your sofa, chaise lounge or love seat; you and your Buddy can go anywhere. Just think of the echo you can muster in your tiled bathroom! $79.99, fluidaudio.net