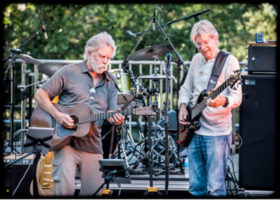 For the first time ever, Bob Weir and Phil Lesh, two founding members of the Grateful Dead, will tour together as a duo performing back-to-back sets of acoustic and electric versions of Grateful Dead classics. The pair will play select U.S. markets including New York, Boston and Chicago as part of the Bobby and Phil Tour, which kicks off March 2 and 3 at Radio City Music Hall.

Fans can sign up for the Ticketmaster Verified Fan Presale starting 7 a.m. EST today (December 11) at bobbyandphilduotour.tmverifiedfan.com/. Tickets will be available to the public 10 a.m. local time Friday (December 15) via Ticketmaster.

Although Weir and Lesh have played together since the inception of the Grateful Dead in 1965, they’ve appeared jointly infrequently since 2015’s Fare Thee Well shows, where they played for the last time with all four surviving members of the Dead. They’ve never performed as a duo without a backing band.

This project came about as Weir and Lesh celebrated the 40-year anniversary of the Grateful Dead’s 1977 album, Terrapin Station. The two performed at Lesh’s own Terrapin Crossroads, as well as Lockn’ Festival and Sound Summit on Mount Tamalpais earlier this year. Fans can expect to hear Grateful Dead favorites as well as additional musical surprises. You can check out the dates below.