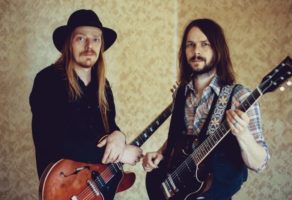 As far as album titles go, Peace—the latest full-length from Graveyard—is about as calming as they come. But back in the fall of 2016, the Swedish rock group’s future was looking unsettlingly grim. Following a decade-long run, the act announced over Facebook that they had flatlined, deciding to break up after “struggling ’n’ juggling with personal issues.” The mourning period was brief, though, because here we are a year-and-a-half and a lineup change later, and Graveyard are blasting the doors off their mausoleum with Peace’s cheekily titled opener, “It Ain’t Over Yet.”

“We’re back and it feels really good. To be honest, I missed it quite a bit when we didn’t know what was going to happen,” guitarist Jonatan Ramm reports of returning from rock and roll purgatory alongside guitarist/vocalist Joakim Nilsson, bassist Truls Mörck and new drummer Oskar Bergenheim.

After getting a new lease on life, Graveyard hit the studio to track most of Peace live-off-the-floor with producer Chips Kiesbye (Hellacopters, Millencolin), with the sessions yielding anything from Blue Cheer-channeling power blues (“Cold Love”) to cayenne-spiced chooglin’ (“Low (I Wouldn’t Mind)”) to brawny, boot-to-the-brain stoner waltzes (“Please Don’t”). And though he flexes ghoulish and gloomy scale work on the record’s “Del Manic,” Ramm reveals that Graveyard’s latest was a joy to unearth.

“It felt like we all had a good time recording this album, and we didn’t feel as pressured. Most of the solos I’ve made are based on having fun, I guess,” he says of how the “nice vibe” of the sessions impacted his flavorful, vibrato-waggling leads, which favor feel over finesse. “I listen to a lot of blues. My favorite guitarists don’t play really fast, but they have a distinction in their way of hitting the notes. I think that’s something to work toward—It doesn’t have to be perfect, but it should be clear.”

What’s also obvious is that, after finding new focus via Peace, Graveyard have risen to haunt us with hooky hard rock for years to come.