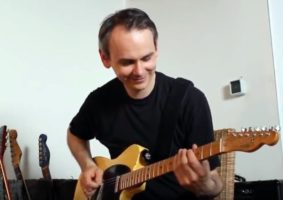 Sure, the internet is full to overflowing with this sort of thing, but we still thought you’d get a kick out of this fine video.

In the clip below, German guitarist Lars Schurse plays the hell out of Joe Satriani’s “Satch Boogie,” chicken-pickin’ style.

We’ve also included a clip of Satch performing the song live in New York City four years ago to help you compare and contrast—and to give you one more reason to not get any work done today.

Lars’ blazing version of the 1987 instrumental is marked by a killer Tele sound and a clever turnaround—plus he packs it all into a mere minute and a half.

The original track is from Satch’s landmark Surfing with the Alien album, which garnered tremendous AOR play and, ultimately, gold record status—both almost unheard of for a guitar instrumental LP. Unlike some of his colleagues, Satriani the performer was no stage elitist who ignored his audience. He brought his music to the crowd, playing with a zest and appeal rarely displayed by a non-singing instrumentalist.

He’s a soft-spoken guy, though he obviously knows exactly what he wants and how to wait, if necessary, to get it. After hearing—who else?—Jimi Hendrix, the 14-year-old Satriani abandoned his drums for a Hagstrom III his guitar-playing sister bought him.

He taught himself some basics by playing along with his older siblings’ records, a variety of discs that included the Stones, the Beatles, Eric Clapton, Jeff Beck, Led Zeppelin, Johnny Winter and Mike Bloomfield as well as Motown hitmakers, early r&b and even some jazz stuff belonging to his parents.

Guitar lessons ended after a couple of shots: “The guy was teaching me ‘Jingle Bells’ and I had already memorized the chord charts from the back of an Alfred Guitar Book my sister had,” he said.