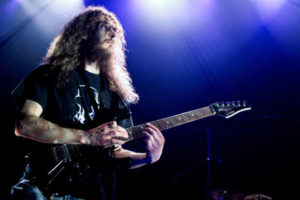 Guitar master Guthrie Govan recently confirmed that he recorded mind-boggling (our words, not his) guitar solos for two Steven Wilson tracks—”Regret #9″ and “Drive Home”—in only one take. And we have the YouTube video to prove it.

“I’m pretty sure [‘Regret #9‘] was indeed done in one take,” Govan told Metal Wani. “In fact, I vaguely recall seeing a YouTube video which documents that very moment [watch it below]. But from my perspective, I don’t think there’s anything particularly remarkable about that. It’s just the way the whole ‘epic guitar solo’ assignment always seems to pan out whenever I’m working with Steven. My solo on ‘Drive Home’ was done in much the same way.

“‘Drive Home’ and ‘Regret #9’ feature pretty long solo sections, and whenever I’m confronted with such a ambitiously proportioned blank canvas, it’s generally easier to maintain continuity and ‘tell a story’ within the context of one uninterrupted take. I’m sure I could have recorded a more ‘perfect’-sounding solo by piecing something together in the studio, one lick at a time, but with that approach you always seem to sacrifice something in terms of the overall flow.

“I think the ‘stream of consciousness’ type of solo really needs to be improvised in one take, in real time, otherwise the finished product will somehow lack a coherent ‘narrative arc’.”

You can check out both songs below; you also can see Govan record the “Regret #9” solo in one take above. “Drive Home” is from Wilson’s The Raven That Refused to Sing (and Other Stories), which was released in 2013. “Regret #9” is from 2015’s Hand. Cannot. Erase.