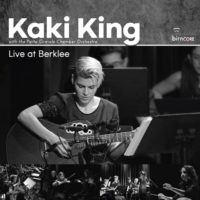 Kaki King has premiered a track—and its corresponding performance video—from her new album, Live at Berklee. You can check it out below. Like the rest of the album, the performance features a guest appearance by the Porta Girevole Chamber Orchestra.

The song, “Hababout,” represents the only previously unreleased track on the album, and it was written specifically for the live performance featured on the disc.

“This track was my first time writing something just for woodwinds, trumpet and guitar,” King told Relix. “It was written as a kind of lullaby for my daughter, who says ‘hababout’ instead of ‘howabout.’”

Kaki King Live at Berklee, which will be released September 22, was recorded live at the Red Room at Cafe 939 in Boston back in April. It features King performing new arrangements of her solo guitar compositions, reimagined with the addition of strings and woodwinds.

Kaki King Live at Berklee Tracklist
1. Tune Up
2. So Much for So Little
3. Fences
4. Solipsist
5. Doing the Wrong Thing
6. Neaderthal
7. Night After Sidewalk
8. Skimming the Fractured surface to a Place of Endless Light
9. The Surface Changes
10. Fortuna
11. Hababout
12. Magazine