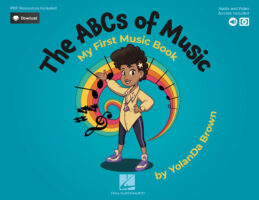 The ABCs of Music: My First Music Book, written by award-winning saxophonist, broadcaster, and author YolanDa Brown and published by Hal Leonard, aims to provide an accessible, fun, and informed introduction to music for children aged 6–11.
Through a process of discovery, listening, fact-finding, composition, and playing, children will be guided on a musical journey inspired by Brown’s infectious joy and enthusiasm. Beautifully designed in full color, The ABCs of Music allows children to explore their thoughts and feelings about music through creative exercises and playlists, introducing them to instruments and genres as well as the basics of music literacy. Featuring exclusive educational songs by Brown and the opportunity to perform alongside her band, The ABCs of Music is the perfect book for parents, caregivers, and schools looking to facilitate those first steps into music.
This feature-rich book includes videos and play-along audio with Brown, downloadable PDF resources, online instrument sample sounds, and educational songs by Brown. Audio and video are accessed online using the unique code inside the book and can be streamed or downloaded. The audio files include PLAYBACK+, a multi-functional audio player that allows you to slow down audio without changing pitch, set loop points, change keys, and pan left or right.
“I am extremely proud to have written a book that provides children with an introduction to music and the magic that comes with it,” said Brown. “Every child should have access to music, the sounds, genres, instruments, and all its wonderful benefits. I would like this book to play a part in introducing a musical world full of joyous learning and discovery to many generations of children.”
The ABCs of Music: My First Music Book with online audio, video, and PDFs retails for $16.99. For more information see halleonard.com.
About YolanDa Brown
YolanDa Brown is an award-winning musician, broadcaster, author, and philanthropist. She is known for her delicious fusion of reggae, jazz and soul. She has toured with the Temptations, Jools Holland, Billy Ocean and currently is composing music for the iconic “Sesame Street.” A broadcaster too, YolanDa is working across TV and radio and was awarded an Honorary Doctorate of Arts by the University of East London in 2011.  A champion for the importance of music education, YolanDa is Chair of Youth Music and has sat on panels for PRS Foundation and the IVORs and delivered keynotes for Music Mark, ABRSM, and music hubs across the U.K. YolanDa was recently invited by the British government to sit on an advisory board for the National Plan for Music Education.
yolandabrown.co.uk
About Hal Leonard
Founded in 1947, Hal Leonard is the world’s largest provider of music publications and music instruction materials. In its catalog of more than one million titles available in print and digitally, Hal Leonard represents many of the world’s best-known and most respected publishers, artists, songwriters, and arrangers. Their global headquarters is in Milwaukee, WI, and their distribution and printing facilities are in Winona, MN. In addition, they have offices in San Francisco, Boston, and Austin, TX, as well as abroad in Australia, Belgium, China, Germany, the Netherlands, India, Italy, Switzerland, as well as in London and Bury St. Edmunds in the UK.

Steve Vai postpones the start of his American tour

Every Time I Die announce breakup