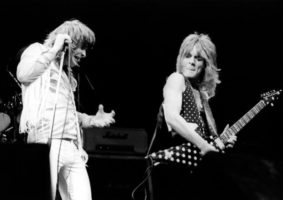 Another isolated guitar recording has captured the attention—and the ears—of the guitar-loving masses!

This time it’s “Flying High Again,” a song from Ozzy Osbourne’s 1981 album, Diary of a Madman. The isolated guitar tracks shine the spotlight on the brilliance of a young Randy Rhoads, not to mention the breathtaking climax of this classic track’s guitar solo.

Though widely thought to be about drug use, Osbourne says the song was inspired by his re-emergence as a solo artist after being fired from Black Sabbath. Besides Ozzy, the musicians you don’t hear are Bob Daisley (bass) and Lee Kerslake (drums).

And, as a reader pointed out below, it’s not exactly an isolated guitar “track”; it is, in fact, more like three tracks.