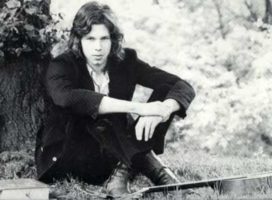 The late British singer-songwriter/multi-intrumentalist Nick Drake was largely unknown until a 1999 car commercial featuring an acoustic-guitar-and-vocal song called “Pink Moon” hit the airwaves. As a result, almost 30 years after his death at age 26, Drake enjoyed a resurgence.

Drake arrived in the early Seventies, when psychedelic sounds and bombastic/harder rock were en vogue. He was lost in the shuffle, a casualty of mismarketing and his inability to self-promote. It didn’t help that he was hard to classify; though influenced by “folkies” like Bob Dylan and Bert Jansch, or that Drake had a fascination with modal jazz that put his compositions in a league of their own.

In this Nick Drake lesson, we will cover the open tunings and inventive fingerpicking patterns of fan favorites. A capo is required to faithfully reproduce all examples.

One of Drake’s rare compositions in standard tuning, “River Man” (Five Leaves Left) is a haunting, atmospheric piece sweetened with nature sounds, miscellaneous noises and an intense string arrangement, all delivered in a swinging 5/4 groove propelled by Drake’s fingerpicking and colorful voicings. FIGURE 1 depicts most of the song’s chord shapes and pick-hand patterns in an “in the style of” arrangement.

Now let’s begin tinkering with tunings. Drop the pitch of your third string to F# (Drake’s open-E9sus4 tuning), place a capo at the sixth fret and you’re ready to tackle “Cello Song” (Five Leaves Left), the primary picking pattern of which is approximated in FIGURE 2a. Paired with the song’s signature Esus2 voicing, this pattern requires a relaxed pick hand and use of the specific fingerings indicated. FIGURE 2b features another voicing used in the song and is plucked similarly.

The title track to Pink Moon requires you to drop or raise various string pitches to arrive at an open Cadd4 tuning (low to high, C G C F C E) and strum with your fingers voicings like those shown in FIGURE 3. Tip: strum all the strings with your fingertips, with the exception of when lower strings appear by themselves (“thumb strum” these); groove with
a very slight 16th-note swing feel, and your “Pink Moon” rendition will be “on its way.”