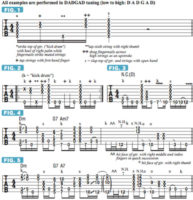 How to Combine Melody, Chords and Percussive Sounds

In the previous column, I demonstrated one approach to composing for solo acoustic guitar, wherein I began with a simple melody, to which I added a harmonic framework then fingerstyle ideas and percussive elements. I’d now like to share another approach I often employ and recently used to compose a new tune called “Overload,” which is performed in DADGAD tuning.

“Overload” is a percussion-heavy song in which I employ a wide variety of techniques to create rhythmic sounds by hitting the guitar in many different ways and places. The entire composition grew from a single seed of an idea. I was sitting with my guitar and came up with the very short rhythmic phrase shown in FIGURE 1, which is comprised of five rhythmic “hits,” each of which is achieved in a different way.

The initial hit, on beat one, is sounded by “slapping” the sixth string with my pick-hand thumb while simultaneously hitting the higher strings with my pick-hand fingernails. I then perform the second 16th-note accent by tapping my fret hand’s middle finger against the middle strings. The third 16th-note accent is then sounded by tapping my pick-hand thumb against the sixth string, and the fourth accent is created by dragging my pick-hand fingernails upward across the higher strings. The final accent, which falls squarely on beat two, is sounded by slapping my open pick-hand palm against the face of the guitar, as well as the strings, up near the high end of the fretboard.

I think of this heavier accent on beat two as a “snare hit,” which is a sound and approach I picked up from guitarists Bob Brozman and Petteri Sariola.

Let’s now bring a low bass note into the picture, as shown in FIGURE 2. Here, I bring the low-note accents into play on each beat but move the note around so that it falls on a different 16th note each time, meaning a different part of the beat. Practice this sequence slowly at first, so that you will be able to get all of the percussive elements to sound properly on the right parts of each beat while bringing the open sixth string into play.

To elaborate a little further, In FIGURE 3, I begin by sounding the open sixth string together with the third fret of the fifth string; I simultaneously strike the string while hitting the face of the guitar with my open pick-hand palm. I then immediately hammer-on from the third fret up to the fifth. This is followed by two more 16th-note accents on open sixth-string. I then follow a similar progression of percussive accents with the notes G, A and C on the sixth string, ending the phrase with a hammer on from C to D, 10th to 12th fret.

We’re now ready for the much more complex actual guitar part, shown in FIGURE 4: while sliding from C to D on the fifth string, sounded along with the open sixth string, I additionally sound C and E on the top two strings, sliding the E up to an F, one fret higher, while pulling off on the second string from C to the open A note. A similar progression of percussive techniques surrounds some new chord voicings for G7 and Am7. Bar 2 is much more complex, in that I begin with two hits with my pick-hand thumb on the upper bout of the guitar body, followed by a strike with the index and middle fingers on the lower bout. Within beats one and two, I include natural harmonics at the 12th fret and then hammer-on to a series of notes on the sixth string.

FIGURE 5 offers another take on this approach, utilizing additional chord shapes while also ending with a different phrase.

Mike Dawes is an English guitarist and touring musician, hailed as one of the world’s most creative fingerstyle performers and renowned for his ability to seamlessly replicate a full band on a single instrument. For more information, visit mikedawes.co.uk.