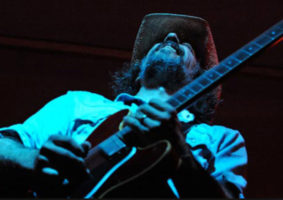 How to Create Guitar Solos That Convey Melodic Continuity

The most memorable guitar solos are those that follow the old adage of creating the impression of a “composition within a composition,” in that the solo sounds like a song of its own and establishes its own musical integrity within the larger piece of music.

In other words, if you can sing a guitar solo, that’s a good thing! Some classic examples of rock songs that feature these kinds of memorable, melodic solos are “Hey Joe,” “Purple Haze,” “All Along the Watchtower,” “Sweet Child O’ Mine,” “Stairway to Heaven,” “Comfortably Numb,” “Wish You Were Here,” “Hotel California,” “Smoke on the Water” and “Something.” In this lesson, I will demonstrate how to establish a melodic phrase and then build upon it to develop a solo that conveys a sense of melodic continuity.

All of the solo phrases demonstrated in this column are played over a funky vamp on E7, played at a moderate tempo. There are no chord changes, so we are simply looking to play lines over the E7 tonality. In FIGURE 1, I establish a simple two-bar phrase that evokes the melodic style of blues great Albert King.

The solo is based on the E minor pentatonic scale (E G A B D), and I begin in bar 1 with a bend up to the fifth, B, release the bend and land on the minor third, G, followed by the root note, E. In bar 2, the notes of focus are again B and G. The three notes, E, G and B, sound “strong” because they are triadic chord tones of Em, making them perfect notes to start or end a phrase with, or accentuate in any way. In bars 3 and 4, I move the lick down one octave and play it almost identically. In bars 5–8, the lick is played in the same octave but is moved down to eighth position, then third. In FIGURE 2, I progressively move the lick down two more octaves as I shift over to the lower strings.

Here’s where the “lick development” concept comes into play. Let’s take the phrase that was played in bar 2 of FIGURE 1 and make it the opening phrase: in FIGURE 3, I repeat that one-bar idea over and over while moving up through different octaves and fretboard positions. This way, it’s easy to see the one-bar line as a lick of its own.

We can develop the idea further by adding another melodic turn on beats three and four of the phrase, as demonstrated in FIGURE 4: here, I begin up high on the first string, and after repeating the phrase shown on beats one and two of FIGURE 3, I add a new phrase based on a combination of eighth notes and 16th notes across beats three and four. This new melodic idea is then moved down through different octaves and fretboard areas.

Now that you have the concept, try applying it to your own solos. Next month, we’ll explore how to further develop memorable, melodically thematic solos.