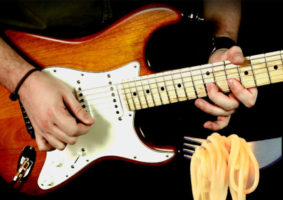 How to Defeat Guitar Noodling

We all noodle around on the guitar. Some of us, admittedly, do it far too often.

We all noodle around on the guitar. Some of us, admittedly, do it far too often. The issue isn’t that we don’t want to practice, it’s that guitar players have a tendency to be easily distracted. The first step to healing yourself is admitting you have a problem, and I don’t know about you, but I DEFINITELY have a problem with wasting too much time wanking around on the guitar.

So, instead of trying to boil the ocean and completely avoid noodling, I decided I’d try to find value in the imminent deviation from legitimate guitar practice. The first course of action was being aware of when I would enter this state of wankery.

Now, sometimes we only have a little bit of time to kill where a productive practice session just isn’t in the cards. This was the case for me, so I already understood I wasn’t about to sit down for a hyper-productive John Petrucci-style routine.

Like most guitar players, I tend to go for the fun lead stuff when I’m just noodling. We all have our go-to licks, and I’m no different. This was the next piece I had to conquer. There’s minimal value in playing something you could play in your sleep, so I made a conscious effort to play something I wouldn’t normally play. I was still in noodling mode, mind you, but I was noodling in a way that was creative–not repetitive.

I chose to go against my natural tendencies of high-gain shred noodling, and instead opted for some crunchy, rhythmic chord strumming. I put the onus on myself to determine a progression and a feel without feeling any pressure to actually practice or improve. This freedom left the door open for some creative liberty, which is extremely important for any musician.

What came out of this session was an idea for a new song, a sense of accomplishment (despite not “practicing” in the traditional sense) and an alleviation of any stress I may have felt had I spent my time playing the same old thing I always play when I pick up a guitar.