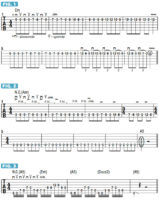 When writing songs, you can develop solo ideas as well as signature riffs by creating melodic patterns on a single string. This is a useful and often overlooked technique that can greatly aid your creativity.

Yngwie Malmsteen and—his biggest influence—Richie Blackmore have frequently exploited this technique, traversing the fretboard while playing fast licks on one string. You will also hear it used frequently in classical guitar and violin music.

Playing up and down on a single string produces a pleasingly consistent tonal quality that cannot be achieved in any other way. It’s also a great way to work on your scale knowledge on the fretboard, and it can help you build up speed and endurance in both hands. In this month’s column, I’d like to detail a few different patterns that I’ve devised to demonstrate the value of this technique.

FIGURE 1 presents our first single-string lick. Using alternate (down-up-down-up) picking throughout, I gradually move up the B string using notes from the E Aeolian mode (E F# G A B C D), also known as the E natural, or pure minor scale. In bars 7 and 8, I switch from straight alternate picking to double pull-offs, wherein a picked fretted note is followed by a pull-off to a lower fretted note and then an additional pull-off to the open string, phrased as eighth-note triplets. Simple as it may seem, it can be difficult to synchronize the steady alternate picking with quick alternating between fretted and open notes. Start out slowly at first, and gradually increase the tempo. You can also execute these licks with pull-offs to the open strings, which yields a smoother, legato sound.

Played entirely on the A string, FIGURE 2 is based on the A Aeolian mode (A B C D E F G), also known as the A natural, or pure minor scale, and is built from a combination of fretted notes and an open-A pedal tone. I start off creating a “threes on fours” rhythmic syncopation across the first six beats by playing what are essentially three-note groups in a rhythm of even, or “straight,” eighth notes, with each fretted note followed by two open A notes.

Notice that bar 4 switches to 3/4 meter, followed by a return to 4/4. The figure ends with a big jump from B (second fret) to F (eighth fret), so be sure to work on your accuracy in shifting from one fretboard position to another while building up speed.

FIGURE 3 offers a slight twist on the con- cept by detailing a riff built from single fretted notes followed by an open string. To begin, I play off of an A5 power-chord shape on the bottom three strings and then switch things up with a wider stretch up to the 12th fret of the G string. As with the previous examples, alternate picked is employed here, so strive for precision and clarity in your articulation.