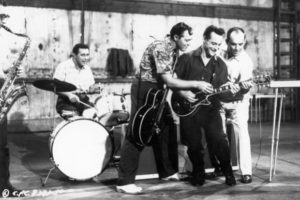 Guitarist Danny Cedrone was born June 20, 1920—and whether you realize it or not, you’re familiar with his work. Even in these post-Hendrix, post-shred, post-everything times, Cedrone’s guitar solo on Bill Haley & His Comets’ 1955 hit “Rock Around the Clock” is a certified jaw-dropper.

Cedrone—a Philadelphia session guitarist who played a 1946 Gibson ES-300 through a 1×12 Gibson BR-1 combo for the track—opens with a furiously picked line, then suddenly works in some tangy half-step bends and slick, jazzy phrases and caps it off with an insanely fast chromatic flurry that encompasses all six strings.

Cedrone was paid $21 for the session. A little over two months later, he died after falling down a staircase, never understanding the effect his solo would have on the next few decades of popular music. He was soon replaced by guitarist Franny Beecher (pictured above), who had played sessions with Haley before Cedrone’s death.

Below, we’ve rounded up some vintage footage of Haley and the Comets lip-synching to the song on a TV show in the Fifties after Cedrone’s death; note that the camera operator knew the guitar solo was worthy of a closeup. Below that, check out a fine lesson—by the fleet-fingered David Escobar—dedicated to the legendary solo. Best of all, it includes tab.

Cedrone and Cliff Gallup—Gene Vincent’s lead guitarist for a spell—were ahead of their time; they played a huge part in the birth of the guitar hero and the evolution of rock and roll guitar.