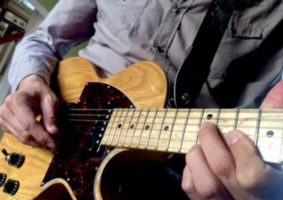 This month we look at five classic repetition licks that incorporate string bends.

These kinds of licks have been a key element of rock soloing since the mid Fifties, with pioneering players like Chuck Berry creating iconic licks that generations of guitarists have built upon since.

By the late Sixties, these licks had become firmly ingrained in the hard rock vocabulary. Throughout the classic rock era of the Seventies, they raised the energy and intensity level in solos and provided a framework for improvisation.

Repetition bends have become the clichés that define the rock style and are still well used today across all subgenres, from blues-rock to modern metal. They form an important part of the authentic rock guitar sound and are a great foundation upon which to build.

Each of this month’s licks lives in the fifth-position “box pattern” of the A minor pentatonic scale (A C D E G). Try finishing each lick with vibrato, using faster, shallow vibrato for a bluesy sound, and slower, wider vibrato for a more modern rock/metal flavor.

For our first lick, angle your fret hand, pivoting from the index finger just above the knuckle and the thumb on the upper part of the neck. Support the ring-finger bends with the middle finger for added strength and control.

Similarly, for this next lick you’re using both the ring and middle fingers to bend the B string. Listen carefully to the intonation of each bend, comparing it to that of the unbent note that follows on the next higher string. Bend using the wrist, with a slight forearm rotation.

This lick uses another popular starting point, bending from the fourth scale degree (in this case, D) up to the fifth (E) on the G string. “Inside-the-strings” picking is employed here for maximum efficiency.

Our final lick is a classic A minor “wall of notes” lick that incorporates a downstroke sweep across the B and high E strings for maximum efficiency. For this one, try bending with the ring finger and middle fingers together and pulling off with the pinkie. As an alternative, try using the middle finger to bend and the ring to pull off.