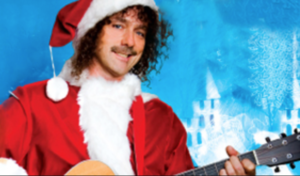 How to Play Five Holiday Classics on the Guitar

Now that your belly is stuffed with turkey and pumpkin pie, it’s time to shift our attention to Christmas! In the spirit of the Axemas season, we’ve compiled a handful of select solo guitar arrangements of poplar holiday songs. There are alternate arrangements of two of the five songs, and the tablature ranges from easy to intermediate, with all arrangements ideally suited for acoustic or clean-tone electric guitar.  And if you want even more holiday-themed guitar arrangements with tab and video, check out our best-selling Play Christmas Songs on the Guitar! DVD that’s available in our online store.

Pluck the strings with your individual fingertips, as opposed to strumming them, as there are several chords that include notes on non-adjacent strings. The Am chord in bar 5 is followed by an F# note on the D string’s fourth fret, which requires a bit of a fret-hand stretch to reach. You can let go of the previous E note on the same string when you go to fret the F# with the pinkie. When playing the Dm chords in bars 9 and 10, be careful not to sound the open B string until after you’ve played the chord.

This arrangement is, for the most part, pretty straightforward and makes nice use of arpeggiated first-position chords. Try to bring out the melody notes that are interwoven into the accompaniment. The trickiest part is bar 11, wherein you need to quickly shift from an open Em chord up to a fifth-position Am—the “Stairway to Heaven” intro shape—which requires the rapid deployment of an index-finger barre across the top three strings.

This, the holiest of all Christmas songs, is a tender ballad and should be performed slowly and softly. Two things to watch out for: 1) Be careful not to sound the open B string in bars 5 and 17, and 2) try not to fudge the F# melodic passing tone in bar 14 (first string, second fret) or let its performance disturb the other chord tones of C that are supposed to ring. Here’s a tip: You needn’t fret the full C chord shape and un-played C note on the B string’s first fret in this bar. Just be sure not to accidentally pick the open B string!

As there are no six-note chords here, this arrangement may be performed fingerstyle, plucking the individual strings in a chord simultaneously, as opposed to strumming them in quick succession with the pick. If you do opt to use a pick, note the Xs in the tablature on certain chords, such as the G in bar 1, or the D9/F# and D/F# is bars 6 and 7, which indicate that the A string is to be muted by the side of the finger that’s fretting the note on the low E string. If performing the arrangement fingerstyle, simply disregard the Xs.

Remember what I said earlier about muting open strings that are not supposed to ring into the next chord or bar. You may, however, allow the alternating bass notes within a given chord to ring together, although your accompaniment will sound tighter and crisper if you apply some pick-hand palm muting to the bottom three strings while allowing the top three to ring freely.