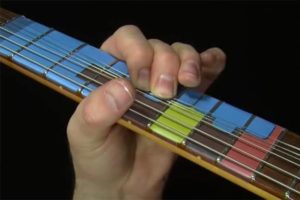 A while back, we ran a very popular video called How to Be a Jerk Guitar Player in 10 Easy Steps.

That video was created and posted by a lessons site called Texas Blues Alley.

But the gang at TXBA doesn’t just tell you how to be a jerk! They also provide several handy blues lessons, many of which are Stevie Ray Vaughan themed, like the one below.

Here’s one of their “Free Lesson Friday” lesson videos; it shows you how to play what Texas Blues Alley calls “SRV multi-string ‘trainwreck’ bends,” as heard in Vaughan’s famous 1983 cover of “Texas Flood” (and in pretty much every existing live performance of the song). We here at GW have called these bends “Albert King–on-steroids multiple-string bends.” You get the idea.

Call them what what you want; the point is, the video below shows you how to play ’em.

“We were just making a tape,” says Double Trouble drummer Chris Layton about the late-1982 Los Angeles sessions that produced “Texas Flood” (the song and the album). “We hoped maybe we were making a demo that would actually be listened to by a real record company.” Jackson Browne (who owned the recording studio) had offered them 72 hours of free time, and the group recorded 10 songs over its last two days at the studio.

The last tune to be tracked was “Texas Flood,” an obscure slow-blues tune recorded in 1958 by Texas bluesman Larry Davis (with Fenton Robinson on guitar) that had been a staple of Vaughan’s live shows for years. Vaughan’s version, which borrowed heavily from Davis’ arrangement and singing style, was recorded in a single take—live—just as the clock ran out. According to Nick Palaski and Bill Crawford’s Stevie Ray Vaughan: Caught in the Crossfire, there were only two overdubs, both covering mistakes made when Vaughan broke strings.

Listening to Vaughan’s bends, it’s a miracle another three or four E and/or B strings didn’t self-destruct every few bars. The stark, five-and-a-half-minute recording is a composite of everything that made Vaughan great, from the note choices to the intensity to his ability to learn from, yet build upon, the groundwork laid by his influences.