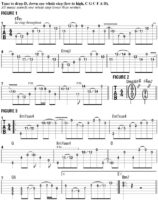 Those who have been following these columns for a while are well familiar with the fact that, in my guitar parts for the music of Periphery and Haunted Shores, I like to employ radical and rapid position shifts while also incorporating open strings and sustained notes.

This month, I’d like to demonstrate a couple of the licks from the song “The Way the News Goes,” which was recorded for the Periphery III album.

For this song, I’ve got my guitar tuned to what I call drop-C, which is drop-D tuning down one whole step (low to high, C G C F A D) and the tuning I use most often with Periphery.

When playing in this tuning, I prefer to think of the notes and chord names in a transposing manner, meaning as if the guitar were tuned to regular drop-D (low to high, D A D G B E), with the understanding that everything is going to sound a whole step lower.

FIGURE 1 illustrates one of the primary riffs in “The Way the News Goes,” which is performed at a fast tempo. In writing this part, my goal was to incorporate certain chord shapes, but instead of playing all the notes of the chord together, I choose to break up the chordal framework into a single-note line that references each chord’s specific harmonic texture.

You might notice that I’ve used this same approach for many of the riffs covered in previous columns and, as a modus operandi, this represents a theme that is revisited often in Periphery’s music. Another important aspect is the tone: I use a very clean tone here, with a split-position setting and a coil tap in order to achieve a more “poppy” sound for each note.

I begin with a hammer-on from F# to A on the fifth string and continue the arpeggiation across the D and G strings, moving the lick forward with more hammer-ons as it progresses. The open first string also figures prominently into the phrase in every bar, except bars 3 and 7. Pay close attention to the many rapid position shifts, which I employ in an effort to attain a “liquid” sound throughout the phrase, and do your best to allow all of the notes to ring together as much as possible.

FIGURE 2 illustrates some of the chordal sounds I was looking to reference via the single-note lines in this passage, such as Dmaj7/F# and F#m7. As the line begins on an F# note, it initially alludes to an F# minor tonality; the second time through, however, I drop an open low D note into the phrase, which changes the implied harmony to Dmaj7. The inclusion of the open top two strings creates an F#m7sus4 sound and an unresolved, harmonically “floating” vibe.

FIGURE 3 illustrates the song’s first pre-chorus riff, which is built from the same principles as the first riff we explored above. The difference here is that position shifts figure prominently into every bar, as do (in nearly every bar) the incorporation of open strings, so work through each bar slowly and carefully before putting the pieces together.

There’s an endless variety of ways in which one can maneuver through a riff when employing these playing and composing techniques, and I encourage you to try to devise some licks of your own based on this approach.