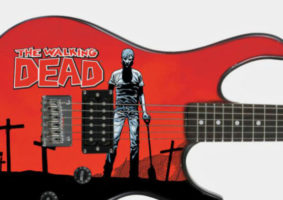 How to Play the Theme from 'The Walking Dead'

In our previous lesson (March 2017), I offered an original jazz solo, a significant part of which features the use of what’s called a minor add2 (or minor add9) arpeggio.

In our previous lesson (March 2017), I offered an original jazz solo, a significant part of which features the use of what’s called a minor add2 (or minor add9) arpeggio, which I had superimposed over various complex chord changes to outline their upper-structure harmony while shifting the same compact four-note shape up and down the neck on the top three strings, using what’s known as parallel, or constant-structure, motion.

That passage got me thinking about the haunting theme music to one of my favorite TV shows, the dramatic AMC series The Walking Dead, that 45-second mini masterpiece heard during each episode’s opening credits.

Composed and arranged by the talented Mr. Bear McCreary, that piece, officially named “The Walking Dead: Main Title,” is based on a much simpler harmonic structure than my souped-up minor jazz-blues progression but is also built, almost exclusively, around minor add9 arpeggios, performed by a chamber string ensemble consisting of two violins, viola, two cellos and double bass.

So, out of curiosity, I referenced the recording online, watched an interesting video blog about the piece by McCreary and was inspired to devise my own condensed guitar arrangement of it and figure out a viable way to play its signature melody on my instrument. Here’s what I came up with (see FIGURE 1).

The melody begins with a repeating one-bar phrase based on a Gm(add9) arpeggio (G A Bb D) and features a hypnotically unbroken stream of notes, wide intervallic skips and a relentlessly steep, rolling contour. The basic melody follows a 16th-note rhythm, but in McCreary’s score, which is performed at a moderate tempo of 92 beats per minute, the violins and viola are instructed to employ an advanced bowing technique called “metered tremolo” to play the melody, which in this case amounts to attacking each note twice in quick succession, using alternating bow strokes.

This is analogous to what we call “double picking,” for which each melody note is repeated using down-up alternate picking. So the stringed instruments in the original score are actually bowing 32nd notes, a feat requiring virtuosic technique at that tempo! I tried to emulate that technique and subtle effect by double picking, but with the guitar’s different tuning, all the string crossing and skipping involved and my limited chops, it was just too arduous for me to do, so I streamlined the line to straight 16th notes and, in so doing, decided to jack up the tempo slightly, to around 100 beats per minute, which felt like a better groove, or “pocket.”

As you can see, my adaptation of the theme incorporates the use of both picked notes and legato phasing (hammer-ons and pull-offs), with only the notes on the outer strings being picked, using “outside the strings” picking, meaning a downstroke on the lowest string used, which is accented every time, creating a syncopated rhythmic motif within the unbroken 16th-note stream, and an upstroke on the highest string.

I had tried using straight flatpicking, à la Steve Morse or John Petrucci, but even that technique, with 16th notes, felt too arduous and strained at tempo, so I settled on the articulations shown, which you’ll notice include a ring-finger “hammer-on from nowhere” on the middle note of each arpeggio. You could alternatively play the melody fingerstyle, using your thumb and middle finger to attack the outer notes, or employ hybrid picking (pick-and-fingers technique), which work equally well while offering subtle differences in tone. In any case, strive to make the four notes of each arpeggio equal in volume.

To suppress unwanted string noise, I advise you to palm mute the bottom three strings. And you may also want to additionally use a string damper, such as a hair tie or sock wrapped around the neck between the nut and first fret. One of the most important and challenging aspects of making this melody sound musical and not robotic is incorporating dynamics (volume contrasts), which is a key expressive element in many styles, especially classical and “serious music,” meaning that composed for dramatic films and television programs.

As indicated by “w/gradual crescendo,” begin quietly, gradually swelling in volume through the first seven bars (bar 1 is played seven times), reaching maximum intensity by the time you get to the Ebm(add9) arpeggio in bar 2, then abruptly bringing it back down to a whisper after the final four-note fill in bar 4, at which point you’re instructed to play bar 1 five more times, with another crescendo building up to the final accented G note. Be sure to check out this lesson’s online video for more highly useful performance tips on this arrangement.