How to Utilize Unusual Alternate Tunings Like Jimmy Page

Jimmy Page is regarded as one of rock’s greatest guitarists, bandleaders and producers for the incredibly rich canon of music he created with Led Zeppelin.

But not everything produced by the man was as crushingly heavy as Zep favorites like “Whole Lotta Love,” “Heartbreaker,” “Black Dog” and “Rock and Roll.” Jimmy was often quoted as saying his true passion was to create a combination of “light and shade” in the form of contrasting and complementary musical sounds.

These sounds often found their roots in acoustic English and Celtic folk music, and can be heard as well in the proto-metal electric sounds of the Jimi Hendrix Experience, Cream and Page’s former band, the Yardbirds. A standard technique found in English and Celtic folk music is the incorporation of alternate tunings, utilized by some of Page’s favorite guitarists, such as Bert Jansch and Davey Graham.

Graham was a pioneer of alternate tunings on acoustic guitar, in particular a tuning known as DADGAD, where in the strings are tuned (low to high) DADGAD (see FIGURE 1). DADGAD is often referred to as a “modal tuning.” Strumming across all of the strings in this tuning produces the beautiful, unresolved sound of a Dsus4 chord. Other notable guitarists that employ this unique tuning to great effect are Luka Bloom, Artie Traum, Pierre Bensusan, Laurence Juber, Tony McManus and Richard Thompson.

Today, this tuning can be heard liberally throughout the music of guitarists such as Andy Mckee, Al Petteway, Justin King and Wilco’s Jeff Tweedy. One of Page’s earliest uses of this tuning can be heard on “Black Mountain Side,” from Led Zeppelin’s debut album, though he originally combined elements of this piece with another tune entitled “White Summer.” Page is thought to have based “White Summer” on Graham’s “She Moved Thru’ the Bizarre/ Blue Raga.”

FIGURE 2 illustrates a four-bar riff played in the style of “White Summer.” I begin this figure with a hammer-on from the open G string to A, at the second fret, sounded simultaneously with the open low D string. A melody is then played on the G string in a “raga-like” fashion, similar in approach to that used on the sitar. At the end of bar 2, a series of fast double pull-offs are executed on the G and middle D strings, moving from the fourth fret to the second fret to the open strings, followed in bar 3 by single-note melodic, blues- influenced lines.

The figure wraps up in bar 4 with a sustained D7 chord. One of the most appealing things about DADGAD tuning is the manner in which it facilitates the use of moveable chords in conjunction with open strings, which are used to provide a constant “drone” with either the bass or treble strings. The use of droning pitches is as common in Scottish and Irish pipe music as it is in Indian raga. Another great example of Page’s investigation of DADGAD can be found on the Physical Graffiti track “Kashmir.”

On this song, Page produced dense-sounding chords and chordal resolutions by simply fretting only two strings while strumming across all six. FIGURE 3 illustrates a rhythm part that utilizes this technique, repeatedly moving from sus4 chords to major chords in bars 1–4 before breaking into single-note melodic figures, followed by a resolution to a big D5 chord. Another way to take advantage of the unresolved quality of DADGAD tuning is to strum across all of the strings using natural harmonics (N.H.), as Page does at the beginning of his studio recording of “Black Mountain Side.”

As shown in FIGURE 4, a series of different sus4 chords, built from natural harmonics sounded on all six strings, can be produced by lightly laying a single fretting finger across them directly above a given fret while strumming. An added twist is to use whammy-bar vibrato, as shown in bar 2. A great advantage DADGAD tuning offers is the ease with which one can create unusual- sounding chords.

In FIGURE 5, simply fretting the fourth, third and second strings two frets higher than the sixth and fifth strings creates “6sus2” chord voicings. This figure is played in rhythmically syncopated fashion to create an interesting rhythm part. Page’s deep investigation into English and Celtic folk resulted in the development of his substantial fingerpicking technique, heard brilliantly on tracks such as “Going to California” from Led Zeppelin IV.

FIGURE 6 offers a fingerpicked figure played on the top four strings, with the third, second and first strings played open while fretted notes ascend the D string following the structure of the D major scale (DEF#GABC#). I end the phrase with a vibrato on F#, the major third, played over a low D root note on the open sixth string. Let’s now take this approach in a slightly different direction by employing the same picking pattern but ascending two-note pairs, thirds apart, on the third and second strings, as shown in FIGURE 7.

This example illustrates the ease with which one can add melodic content to the droning effect of the repeatedly picked open strings. On the Zep classic “The Rain Song” (Houses of the Holy), Page offers a unique variation on DADGAD by additionally tuning the fifth string down a whole step, from A to G, the fourth string down a whole step, from D to C, and the second string up a half step, from B to C, resulting in (low to high) D G C G C D (see FIGURE 8).

Strumming across allof the strings in this tuning produces a sort of Gsus4/D sound. In a manner similar to “Kashmir,” only two strings are fretted while all of the strings are strummed to produce different chords. In this case, fretting the fourth and second strings at the same fret produces the sound of octaves. FIGURE 9 shows a rhythm part played in this style. Notice the use of sliding chords in bars 6–8. 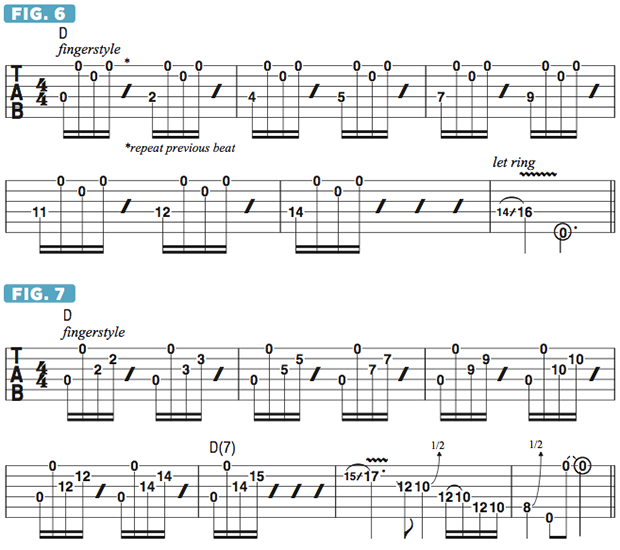 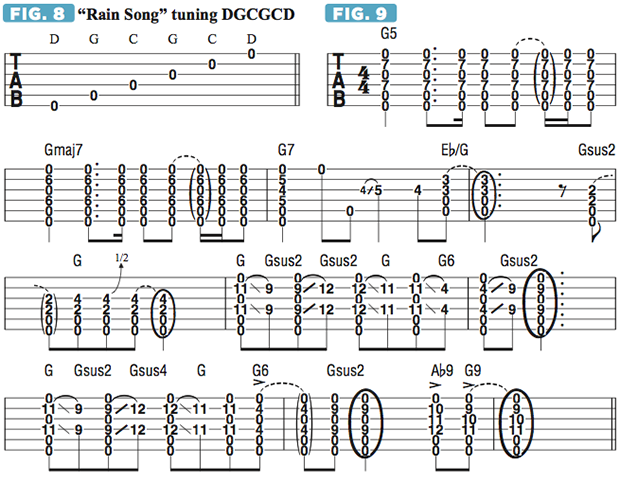