Rolling Stone Magazine’s perennial selection as the greatest guitarist who ever lived certainly isn’t everyone’s favorite… but he is mine. And, in case you are wondering, that list is voted on by dozens of guitar greats of all ages and from all genres. Creating only three studio albums before his untimely death in September, 1970, Jimi Hendrix didn’t just push the boundaries of rock music and guitar playing, he destroyed them.

The first album released by the Jimi Hendrix Experience, was ear candy without equal to millions of fans of psychedelic rock in 1967 and remains so today. It wasn’t only the bizarre sounds, the whammy bar manipulation and the unheard of, musically-appropriate feedback that instantly won Jimi a massive following, but the fresh and extraordinary song writing as well.

Was there ever a more dedicated musician? An accomplished blues player at a very young age, Jimi was seldom seen without a guitar in his hand, even when walking down a street or meeting friends in a café. He lived for the chance to play guitar – by himself or with anyone – and wouldn’t hesitate to invite himself onstage at jams or even shows featuring established artists. Possessed of a very physical, emotive and effortless style of playing, Jimi set the musical world on fire, whether on stage or through his meticulously crafted albums.

For sheer brilliance and versatility of composition and execution, get yourself relaxed and listen – and I mean really listen – to the tremendous “Electric Ladyland” album with its rock’n’roll, blues and psychedelic twists and turns. Pay close attention to the near-symphonic tone poem that is “1983…(a Merman I Should Turn to Be)” and the star-studded cast of backing musicians on “Voodoo Chile”. And for something completely different, Jimi’s stellar live performance on “Band of Gypsys”, later reissued as “Live At The Fillmore East”, is unlike anything before or since.

Don’t let yourself be put off by the whammy bar dive bombs and the howling, squealing feedback, but hear them – and see them in your mind’s eye – for the master strokes they are in sonically depicting the horrors of war. Buddy Miles and Billy Cox came together on this album as a formidable and solid rhythm section accompanying Jimi’s scorching solos and driving power funk.

If you are a Hendrix virgin and an aficionado of guitar rock, you are in for a treat the first time you listen to Jimi’s music. For those of you who haven’t yet found his music appealing, you owe it to yourself to listen again. Just listen calmly and carefully and I am sure you will start to appreciate the genius that was Jimi Hendrix. Guitarists of all stripes and abilities can learn and keep on learning from Jimi’s playing and composition.

It’s not really about playing with your teeth (an expected stage affectation which Jimi tired of early on) or with your guitar behind your back. It’s about the music, the interplay between melody and modalities, the tones – created with simple, antiquated analogue peripherals – that bring colours to mind and even the lyrics that varied from expressions of teenage lust to profound social commentary and futurist musings. Even after listening to his albums hundreds – maybe even a thousand times, I am still in awe of the unique and incredible creativity and beauty I hear in the music of Jimi Hendrix.

Gaze into the past and watch Hendrix performing iconic moves like playing with his teeth.

Premiere: Justin Bernasconi channels the spirit of the Australian outback on luminous new single “Lady In The Field” 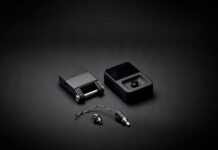 Spotlight: Alex Lees of Four In The Morning

The Superjesus’ Jason Slack: “I had no real plan from the start, I just wanted to make a guitar”