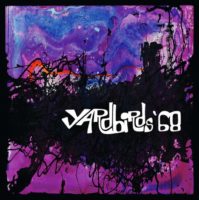 Before he wielded the hammer of the gods—and a Gibson Les Paul or two—as a member of Led Zeppelin, Jimmy Page was a Telecaster-wielding Yardbird. In fact, his tenure with the trendsetting U.K. band lasted from 1966 to 1968.

On March 30, 1968, near the end of the band’s existence, the Yardbirds—which featured Page, vocalist Keith Relf, bassist Chris Dreja and drummer Jim McCarty—performed at New York City’s Anderson Theatre on Second Avenue. That show was recorded and released in 1971 by Epic Records as Live Yardbirds: Featuring Jimmy Page.

The band was never happy with the recording; it eventually slipped into obscurity and, in these zany modern times, is hopelessly out of print, rare and all that good stuff (I actually have it on 8-track, which I guess makes me a weirdo).

It also happens to be the centerpiece of a new Page-produced Yardbirds album that’s scheduled to be released November 5 via JimmyPage.com. The new album, titled Yardbirds ’68, features the Anderson Theatre show plus several late studio tracks, many of which have been previously released.

Yardbirds ’68, a double-disc set, contains live versions of “I’m Confused” (better known as “Dazed and Confused”) and “White Summer,” both of which Page revisited with Led Zeppelin. It also includes a studio version of “Knowing That I’m Losing You,” which later appeared on Led Zeppelin III as “Tangerine.”

“We thought this might be lost forever, but we’ve rediscovered it, re-mixed it. It’s of great historical importance. We’re delighted to see the release.”

Yardbirds ’68 is available for pre-order. You can check out the full tracklist and album art below (you also can hear “I’m Confused”).

For more information, head here. For more about the Yardbirds (who are still active and helmed by McCarty), head here.

LIVE AT ANDERSON THEATER
Train Kept A-Rollin’
Mr, You’re a Better Man Than I
Heart Full of Soul
Dazed and Confused
My Baby
Over Under Sideways Down
Drinking Muddy Water
Shapes of Things
White Summer
I’m a Man (contains “Moanin’ and Sobbin’”)

Mark Seymour: On The Dawn Of Greatness

Is the Silver Snark the speediest clip-on guitar tuner yet?

Sick Riffs: Rob Grote and Pat Cassidy teach you the acoustic and electric guitar lines of The Districts' Cheap Regrets