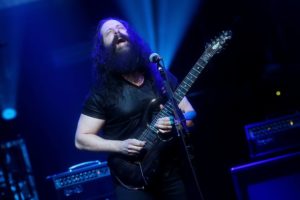 John Petrucci's Most Difficult Song to Play Live: "I Actually Struggle with It"

“It’s ‘Damage Control’ from my [2005] album, Suspended Animation. It’s just a crazy…I’ve said this before—I feel like I’m doing damage control the entire time I’m playing. It just has so many weird things about it—time signatures and technical challenges and things. A concentration song, that one.”

Satriani (Guitar World‘s March 2018 cover star) chimed in at this point: “‘Damage Control’ is…It’s traumatic to stand on the side of the stage and watch him get through it. Because it starts heavy and then you go, ‘Okay, I’ve got to get ready for this. I’m gonna watch, I’m gonna learn something.’ But it’s so intense, and what he describes is just the tip of the iceberg of what as a guitar player he accomplishes.

“And with the rest of the band. Because not only is it difficult to play, but they’re also creating music for an audience. So there’s also that and it’s hard to put that into words what that is. But that’s usually at the end of the song—I’m the one sweating at the side of the stage. And I figure ‘I’ve gotta go backstage and start warming up!’

“But it’s funny that you mention like what is the song that’s the hardest. There’s two things at play. There are song that have parts that we focus on as players—a part that’s fast, it has an unusual stretch, time signature, maybe there’s a bit of a pedal dance you have to do to get it done. But the simple songs for me are always the hardest because you don’t have the pedal or the flashy technical thing to wow the audience with. It’s actually just you playing properly in time, in tune, just the right notes, nothing extra.

“So anything that’s simple like that, like a ballad that hangs by a thread, it’s always the most nerve wrecking in a way. So I think about that.”

You can watch the entire Guitar World video above.

As we hinted earlier, Petrucci’s playing is the focus of the April 2018 Guitar World. In fact, the issue features the multi-page “John Petrucci Guitar Method,” a complete lesson with tabs and videos (see below); it’s the third and final installment of Guitar World‘s Master Class series, which kicked off with Steve Vai, followed by Satriani.

“When I was growing up on Long Island, it seemed that just about everyone I knew played an instrument, and there were so many bands,” Petrucci tells GW. “You could literally walk down your street and hear garage bands playing, and there would be ‘battle of the bands’ contests at school. There was a lot of guitar-driven music on the radio; all the rock stations would always be playing Led Zeppelin, Boston, AC/DC, Ozzy and Black Sabbath. I always knew I wanted to find a way to channel my creativity, and the guitar and music became the way in which I was able to do that.

“When I was young, I had this recurring dream in which I was onstage playing guitar. This was before I was ever in a band, but it drew me in, even before I knew what was happening on the instrument. I’d hear things on the radio and had no concept of how the musicians were making it happen. I’d hear the two guitar players in Iron Maiden playing harmony leads, but I didn’t know how that worked.

“When I played, I’d think, Where’s the other part? I remember hearing Eddie Van Halen employing different playing techniques, like fretboard tapping, and thinking that it didn’t even sound like a guitar. I had no idea how that was being done, but I was drawn to it. And I loved hard rock and heavy metal—it just hit me, and I loved it. I loved Maiden and I loved Metallica.”