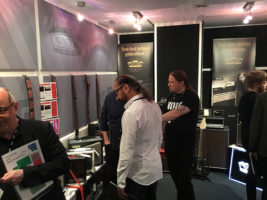 Korg scored a major success with its first ever two day open house event, which began yesterday, 31st August. Held at Korg’s Milton Keynes HQ, the ‘Real Deal’ had been billed as a serious business meeting designed to equip Korg retailers with the product knowledge and enthusiasm needed for what is predicted to be a difficult trading period and MIN was there to see how it all went. To help them on their way, Korg arranged for the event to see the world debut of a clutch of brand new products from Korg and Vox – including a brand new Vox Continental keyboard!
On the day, the turnout was impressive with dealers arriving even before the doors opened at 10am. Soon the building was buzzing with details of the new products and tempting special offers for attendees. All this, not forgetting that it was the first chance most had had to see and try the new Korg C1 Air Piano, which was on display.

New products revealed on the day included:
Korg:
Korg Kross 2 Synthesizer Workstation. Billed as offering ‘More features, more sounds, more possibilities’, the Kross 2 is the long-awaited successor of the KROSS – a compact, portable workstation with a huge range of sounds. While maintaining its identity as ultra-lightweight, compact, and capable of running on batteries, Korg says this new model dramatically enhances Kross’s sounds and functionality. In addition to a total of more than a thousand preset sounds, expansion PCM memory has been newly added. Also new is a pad sampler that allows full-fledged sampling, and USB audio/MIDI interface functionality.

Pa700/Pa700 Oriental and Pa1000 Professional Arranger
Korg’s Pa700 and Pa700 Oriental are the newest additions to the company’s acclaimed Pa-Series of Professional Arrangers. Korg says: ‘The Pa700 has plenty of new sounds (featuring Defined Nuance Control for enhanced realism) which keep performances fresh and exciting, as well as an enormous expanded range of styles covering music genres from all over the world. Combine this with powerful performance functionality, an intuitive user interface, and rich, sculpted sound, and you have an Arranger for the most discerning and demanding player’.
The Pa700 sound engine uses four times the PCM memory of the best-selling Pa600 and extends the amount of User PCM memory to 256 MB using compression. The number of user Style locations has also expanded to a maximum of 1,152. The improved built-in speaker system produces a strong, full-bodied sound and the video output is standardized, so your audience can sing along to the onscreen lyrics.
Totally new is the addition of KAOSS FX, which give users creative control on performance. ‘From subtle morphing between Variations and Drum Kit types, fine mixing between accompaniment Sounds, live reshaping of ongoing rhythms, to the most radical note-crunching effects used by countless DJs, tape delay and arpeggios, you can add ‘liquid mixing’ to any Style or MIDI Song with the aid of easy-to-use computer-assisted composition features. Push the boundaries of your musicality!’

Korg Pitchcrow-G Clip-On Tuner
The PitchCrow-G clip-on tuner for guitar/bass is now available in three new limited edition metallic-finished variations. Boasting more features and a clip-on format, with an RRP of £19 these look like potential winners in the all important run-up to Christmas,.

Vox
Most visitors to Korg’s event probably anticipated the Vox introductions being more amplifiers from the venerable brand – but they (and we!) were in for a surprise when Korg revealed the reincarnation of a once-mighty keyboard from Vox’s past – the Continental, though, this being the 21st Century, it’s not quite the Continental organ of Dave Clark Five fame!

Vox’s Continental keyboard still does ‘the organ thing’ but in its new incarnation offers the sounds of three vintage organs. Vox says it has been designed with professional users in mind and in addition to the three organ sounds it also offers an E.PIANO part ‘with attention paid to every detail’. It also boasts: ‘Rich PIANO part powered by high-capacity samples’, Key/Layer part, powerful onboard effects, touch sensor, nine band EQ, Nutube valve for a genuine tube sound, ‘newly developed waterfall keyboard provides excellent playability’ a Dynamics knob, Scene memories, lightweight sheet metal and aluminium body and included expression pedal and an ST-Continental keyboard stand.
Available in October, prices will be Continental-61 SSP £1,769.00 and Continental-73 SSP £1.869.00.

Not to be outdone by the new Continental, Vox also showed three 50 Watt VX series combos, each boasting its well reviewed Nutube technology. The VX50 BA is a bass amp with an 8″ speaker, four band EQ, Compressor and overdrive. The VX50 AG is an acoustic guitar version, also fitted with an 8″ speaker but this time a coaxial version, offering twin channels for instrument and mic use, the latter being phantom powered. The third of the new VX models is the VX50 KB, designed for use with portable keyboards. It too features a coaxial speaker for improved frequency response and is a three channel design with independent volume controls.

All three of the new VX models will sell for RRP £259 and will be available in September.
Finally, Vox announced new core AC Custom models in ‘Maroon Bronco’ colours. Models on offer will include the AC30, AC15, AC10 and AC4. They will; be available from October.