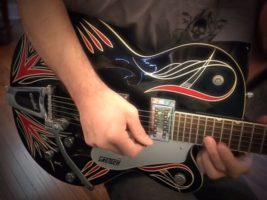 Learning Solos Played on Other Instruments to Expand Your Improvisational Approach

A study technique that has proven invaluable to me over the years has been transcribing—figuring out, note for note—solos played on other instruments besides the guitar, which is something I still spend quite a lot of time doing. Early on, I would focus on solos by other guitar players, such as Wes Montgomery, Pat Martino, Jimi Hendrix, Johnny Winter, Jeff Beck and Buddy Guy.

This is something I still do, but at a certain point in my development I began expanding my transcribing endeavors to include music played on other instruments, such as the saxophone, trumpet and piano. Doing this has provided me with lots of fresh ideas and approaches that I would then incorporate into my own soloing ideas and techniques.

I like to emulate a vocal-like sound when I’m soloing, often using a stereo chorus or delay effect to attain that feel. I also strive to achieve that by employing a legato approach, using hammer-ons, pull-offs and string-bends, and using a light touch when alternate picking in an effort to retain some of that legato feel.

I’m especially attracted to the types of ideas sax players often come up with. One of my all-time favorite sax players is the late, great Michael Brecker, whom I’ve had the honor or working with for many tears. The primary lick idea that is the focus of this month’s column comes from one of his solos and consists of eight notes.

FIGURE 1 exemplifies how I would use the lick in a solo, and FIGURE 2 shows just the specific eight-note pattern itself, repeated and moved up chromatically from C minor to Gb minor. In both examples, the line is played in steady 16th notes, and the first four notes are C-Eb-D-F, followed by E-Db and then Eb-Gb. What we have is an ascending sequence of minor third intervals based initially in C minor (the first four notes), followed by a chromatic shift up to Db minor but with a slight twist—a change in the order of notes on the third pair—to create a more interesting melodic contour.

In FIGURE 1, I move this melodic “shape” up three times in half-step increments, followed in bar 3 by a straight chromatic ascent from F up to Ab an octave and a half higher. I like to alternate pick everything in this phrase, but try incorporating hammer-ons and pull-offs wherever you want to. In the final two bars, I fall into bluesy, guitar-friendly lines based on C minor pentatonic.

Once you have this pattern memorized and under your fingers, try dropping it in and out of other melodic ideas, as I do in FIGURE 3.