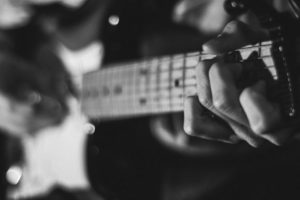 Learning to Slide: How This Legato Technique Can Enhance Your Sound

Sliding is a legato technique that allows a guitarist to manipulate the sound of a note after it is played.

Sliding is a legato technique that allows a guitarist to manipulate the sound of a note after it is played.

Slides enable you to connect two or more notes smoothly and quickly, and make for more seamless position changes on the fretboard. They add life to notes and lend a vocal quality to your licks. Sliding is an essential technique for both rhythm and lead playing. As the name suggests, a slide is produced by picking a fretted note and then sliding your fretting finger up or down the string, maintaining contact with it, to arrive at a new note on another fret. When the destination fret is reached, this new note will sound.

In order to produce an effective slide, constant pressure is needed on the string throughout the length of the slide. A slide can be as short as a single fret or as long as the entire length of the fretboard. Slides can also be done with chords. Slides are noted by an upward or downward diagonal line connecting notes in notation or numbers in tablature. They can have the letters “sl.” written above them as well.

Successful slides are a matter of touch. When you first pick the string, fret the note as you normally do. As soon as you start your slide, ease up slightly on your fretting finger so it glides swiftly and effortlessly over the frets to the next note. Too much pressure, and your finger won’t slide; too little, and you won’t create the sound of the slide. Once you reach your desired note, reapply pressure with your fingertip, otherwise the target note won’t sound. Below are some basic variations on the slide technique:

Two-note slides connected with a slur.

A slur (curved line indicating notes that are to be articulated with either a hammer-on, pull-off, or slide) along with a diagonal line indicates a legato slide. This means that you pick the first note and then slide into the second without picking the second note. This slide can be executed either ascending or descending.

Let’s give it a try: Play the note on the first string, ninth fret. Hold the note for one beat, and then on beat two, while the string is still ringing, quickly slide your fret-hand finger to the twelfth fret, keeping full finger pressure the whole time. This will cause the note at the twelfth fret to sound without you picking it.

To play slides that are noted with a diagonal line but no slur, you pick both the first and second notes. Again, this type of slide can be executed either ascending or descending. Play and hold the first string, ninth-fret note for a beat. Then, at beat two, slide up to the twelfth fret and strike the string with the pick just as you arrive at the twelfth fret.

Sliding into a slide.

This slide doesn’t connect two different notes but rather slides into a note from an indefinite point typically a few frets below, much the same way a baseball player slides into home plate. It is a quick slide and is heard as one note, not two. It isn’t in rhythm and serves only to decorate your target note. This slide is noted as a dash preceding a note. What you want to do when beginning this type of slide is to start your hand moving in the direction of your target note before starting to press down on the strings. Begin the slide from two or three frets below your target note. Using the first string, ninth fret note as your target note, and using minimal finger pressure, strike the string with the pick while your fret-hand finger is in motion, somewhere between the starting and target frets (the sixth and ninth frets, in this example). As your finger slides up, gradually increase your finger pressure so that as you arrive at the target fret (the ninth fret), you are exerting full pressure.

Sliding out of a slide.

The opposite of sliding into a slide is sliding out of one. After holding a note for its duration, simply slide your fret-hand finger down the fretboard toward the nut and lift the finger after a couple of frets. This slide is noted as a dash following a note. Using the first string, ninth-fret note, pick the string in the normal manner. After letting the note ring for the indicated duration, slide your fret-hand finger down the string, gradually releasing finger pressure as you go, to cause a fading-away effect. After a few frets, lift your finger completely off the string.

A long slide is simply an ascending or descending slide that goes nearly all the way up or down the neck, releasing finger pressure and finally removing your finger from the string toward the end of the neck at either end of the guitar. At some point during the long upward or downward slide, if you don’t release finger pressure and stop your hand, you will end up hearing some note as a stopping point. If you let go of the string, you will end up hearing an open string.

Slide up and back down again.

Here you are sliding up the fretboard and then back down but not really hearing a specific starting or ending note. This is hard to notate specifically. Because of this the notation is usually a little more detailed than the true spirit of the effect. Try sliding to approximately the twelfth fret (if you miss the mark and hit the eleventh or the thirteenth fret, you won’t really hear much of a difference), and use the twelfth fret as the point where you reverse direction and take your slide back down.

If you play a slide slowly enough, you produce what’s known as a glissando. It’s an effect that you hear on harps, pianos, and guitars, where all the notes between the two principal notes sound. Glissando is noted by a wavy line between two notes.

Sliding is a relatively easy technique that shouldn’t take you too long to master, but because you may experience some minor challenges when first learning to slide, here are ways to clear the most common of these hurdles:   If you experience an uneven tone, remember to keep your sliding finger pressed down evenly on the string during the duration of the slide.

If you experience lag in sliding, chances are you’re gripping the neck too tightly which will result in a slow slide that won’t sound smooth. Relax your hand and lighten your grip. Your fretting hand should be able to move about freely. Press down only as hard as you need to in order for the note to keep ringing. You may discover that you have bad aim when sliding. You either overshoot or undershoot the targeted note. To remedy this, keep your eyes on the slide as you execute it, especially a longer slide, to ensure a more accurate result. Another thing to consider when sliding is what to do with your thumb. It will either make or break your slide.

If you don’t have to move your thumb to slide, don’t. It provides a stable foundation. If you’re sliding short distances, chances are you won’t have to move your thumb. If you’re sliding longer ones, you definitely will. In this case, remember to relax your hand and grip while maintaining adequate pressure when moving from fret to fret. Your finger and thumb should release just enough to move freely. Go slower until you get the movement down. Finally, be sure to practice sliding with all your fingers. Yes, even your pinky. Don’t limit sliding to your just index finger.