Martin Guitar has unveiled the 2.5 millionth guitar made by the 188-year-old, family-owned company. Martin’s design team created the breathtaking instrument in partnership with Chris and Diane Martin’s personal jeweler, Gary Werkheiser of Werkheiser Jewelers Ltd., in Bethlehem, PA, to celebrate the milestone. The top of the guitar, set with 436 diamonds, depicts the map of the stars that C. F. Martin and his family would have seen in the sky the evening they arrived in New York City on November 6, 1833. In addition, the hand-engraved pickguard features a map of lower Manhattan from 1833 with a ruby set at the location of C. F. Martin’s first store at 196 Hudson Street.

The team of Gary Werkheiser, Kris Franzese, and Doreen Vashlishan spent close to 200 hours setting the stones and hand engraving the features. “Werkheiser Jewelers Ltd. is honored to have been a part of the creation of the 2.5 millionth Martin Guitar. We are truly proud of the finished product,” said Werkheiser.

“This guitar is the perfect way to honor C.F. Martin Sr.’s journey to America and to celebrate the Martin family’s continued legacy. We are thrilled to share it with the world,” added Chris Martin.

C. F. Martin & Co. has been family owned and operated since the first guitar came off Christian Frederick Martin Sr.’s workbench in 1833. As of 2022, there have been 2.5 million guitars produced. In honor of this milestone, the instrument design team, partnered with Werkheiser Jewelers to create a stunning masterpiece – the Custom D-2.5 Millionth – which will live in the Martin Museum in Nazareth, PA. The theme of the guitar represents Christian Frederick Martin Sr.’s transition from Germany to America. The gems that adorn this milestone guitar include 436 diamonds, six natural sapphires, and one ruby, for a total weight of 21 carats. For the back and sides, the team selected special Belizean rosewood from Hearne Hardwoods that includes birds’ eyes throughout the grain, which, in essence, replicates what you might see in the sky. The team decided to let the natural beauty of the wood stand alone on the back of the guitar. On the inside of the guitar, the design features inlay work that includes a coat of arms for C. F. Sr.’s hometown in Germany, the sailing ship he arrived on, and the storefront of his first shop in New York City. There is also a stainless-steel plaque on the inside of the guitar that provides a brief background of the instrument. The headstock and fretboard include a Star of Bethlehem that looks like a compass rose, which aligns with the navigational theme of the instrument. It also incorporates precious metals into the fingerboard, including platinum wire inlay. The pickguard is made of palladium, and it includes a map of New York City from the 1830s showing the area where the original shop was located, with the shop’s location marked with a ruby. The bridge is also unique, combining a pyramid bridge that would have been used in the past and a modern belly bridge that is used on our modern instruments. 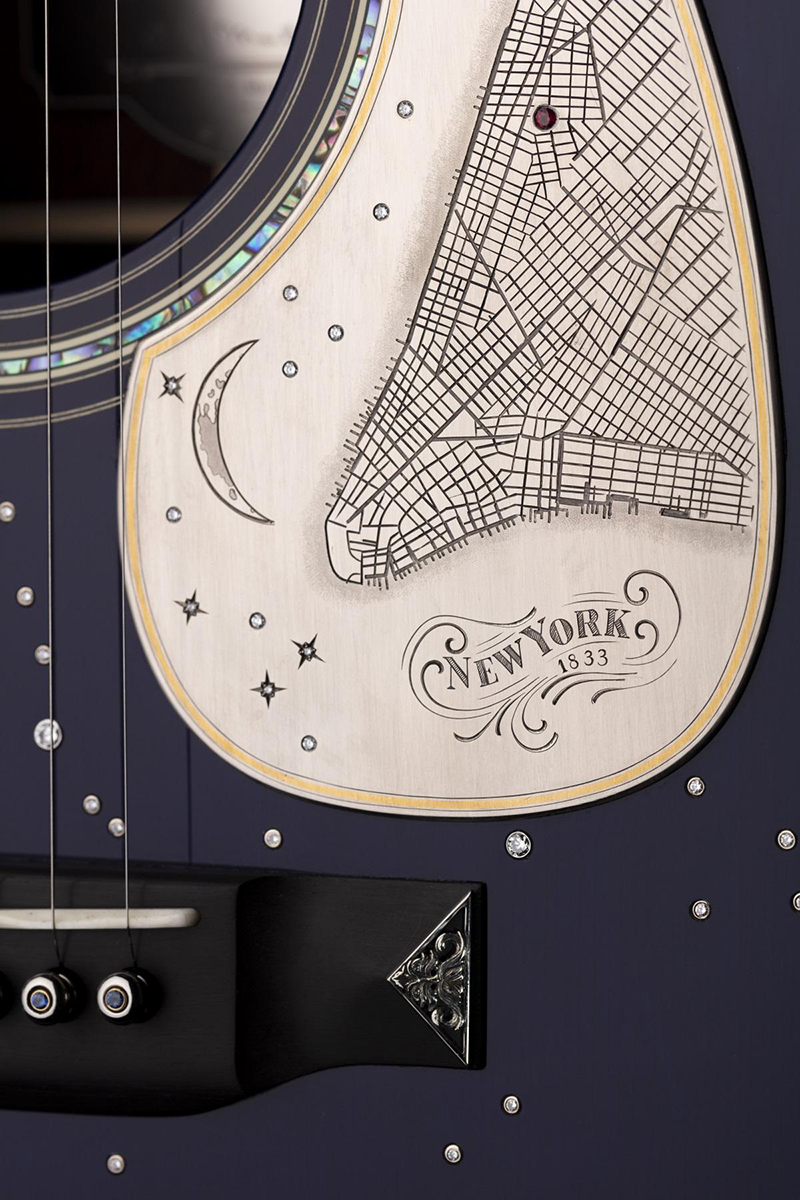 Martin also created one replica of this guitar (serial #2,500,001) that will be offered up for auction. The replica was crafted with special Brazilian rosewood from Chris Martin IV’s personal collection, which has been in storage for many years awaiting an extraordinary project like this one.

About Martin Guitars and Strings:

C. F. Martin & Co.® has been Inspiring Musicians Worldwide® for nearly two centuries with their superior guitar and string products. Martin guitars and strings remain the choice for musicians around the world for their unrivaled quality, craftsmanship, and tone. Throughout the company’s long history, Martin products can be seen and heard across all genres of music and in all segments of pop culture, from concert and theater stages to television and movies.

With an unwavering commitment to environmental sustainability and responsible manufacturing practices, Martin continually drives the acoustic guitar market forward, introducing innovative features that have become standards across the industry. These groundbreaking innovations include the introduction of X-bracing, the 14-fret guitar, and the “Dreadnought” size guitar.