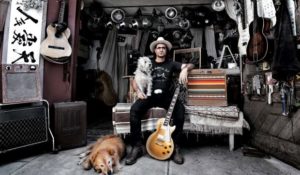 Next thing you know, Joe Perry, Muse, At the Drive-In, Bob Clearmountain, Biffy Clyro and Rich Costey are putting in their orders. Simply put, the horse is out of the bag.

If you’re wondering what everyone is so amped up about, look no further than the Crazy Horse’s unique, vintage-voiced, tube-driven brawn and crunch. “It’s as if a prototype Fender or Magnatone fell off a truck in the early Sixties and never made it to the factory to be mass produced,” says Bush guitarist Chris Traynor, another high-profile Crazy Horse owner.

That jives nicely with the vision of the amp’s creator, Gio Loria, owner/designer at Black Volt Amplification, which hand builds and hand wires each amp in L.A.’s Silver Lake.

“I wanted to distill the greatness of a vintage Fender Tweed Deluxe, a 4×10 Bassman and maybe a 40- to 50-watt Marshall into a combo that cuts all the proverbial fat,” he says. “I love the clean tones of Tweed and Blackface-era amps, but they don’t always have enough teeth or aggression. Vice versa with old Marshalls—amazing distortion but often missing those round, clean bell tones. Black Volt gets those brilliant cleans with the purest distortion you’d ever ask for. Throw in a boost or drive and you’re in straight-up Plexi land.”

Even when it’s not plugged in, the Crazy Horse is a conversation starter. The Navajo rugs and blankets Loria uses as grill cloths make the amps look like something out of turn-of-the-century Wild West photos by Edward Curtis. The cabinet wood is reclaimed pine from old barns, homes, garages—pretty much anywhere.

“There have been studies on old instruments with inexplicable tonal qualities,” Loria says. “The dried resin becomes glass-like and adds a character you won’t get out of a new piece of wood. There’s also something special about keeping it out of a landfill. Upcycling is good for everyone.”