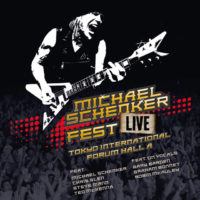 Thirty-five years have passed since the Michael Schenker Group released their legendary 1982 live album, One Night at Budokan.

However, last summer, Schenker—one of rock’s most respected guitarists—returned to Japan with three of the vocalists who helped him achieve worldwide success in the Eighties to record a new live disc.

The show, which was shot and recorded in front of 5,000 fans at Tokyo’s International Forum, will be released March 24 as Michael Schenker Fest Tokyo on CD, DVD, Blu-ray and digitally. The album reunites Schenker with MSG vocalists Gary Barden and Graham Bonnet, plus Robin McAuley of the McAuley Schenker Group. Also performing were MSG alumni Chris Glen (bass), Steve Mann (guitar) and Ted McKenna (drums).

The album celebrates the music and guitar wizardry of Schenker—and gives longtime fans a chance to re-live some incredible rock and roll moments.

I recently spoke to Schenker about Michael Schenker Fest Tokyo and more in this new interview.

How did the Michael Schenker Fest come together, and when did the idea for this live album begin?
It started about two years ago. A promoter had the idea of having Graham Bonnet and his band support Temple of Rock and sing a couple of songs with us. When we did that, I was like, wait a minute. There are so many songs from different eras and I’m playing all of this past material with different singers. I thought that if I could put Robin and Gary and Graham together I could do all of the Eighties material and perform those songs with the original singers—and it would be fantastic!

So I started thinking about a group of musicians: Steve Mann, who is a fantastic guy and player and was connected to McAuley and myself from the McAuley Schenker days, and Chris Glen and Ted McKenna, who had both worked with Graham and were also the original rhythm section [after Cozy Powell] for the Michael Schenker Group with Gary. It couldn’t be better than that.

A promoter in Japan eventually found out about it and set us up on tour. One of the shows was Tokyo, a beautiful place that sold out immediately. I decided to record it and make sure it would be captured forever. In a way, it’s like a déjà vu of Budokan.

What was it like performing with Graham, Gary and Robin again?
It was fantastic. It was a celebration of music and about enjoying it with fans and just having a blast. The first part of my life in the Seventies was the development; making a blueprint and focusing on the art of lead guitar playing with self-expression. I had finished both Lights Out and Strangers in the Night [UFO] and Lovedrive [Scorpions] by the time I was 23, so I already had a taste of the peak and the fame. But I also was able to decide between continuing to do that or having the freedom to experiment with music.

Although I decided to experiment and have fun doing instrumentals, I’d always get phone calls from people asking me to join them for various projects. When I look back to the past, the things that went down were just incredible. Then in 2008, I got the urge to step on stage again. I took it as a sign that I needed to be back in the scene and carry on the things I started in the first part of my life. Only this time, I was ready to enjoy everything consciously, and things developed very quickly. It started off with Gary and the reunion album and has snowballed from there.

Can you tell me how you came up with the track “Into the Arena”?
I was in the middle of writing and had booked a rehearsal studio with a drummer and bass player and was just jamming around. I sat down and played to discover and just started working it all out. By that point, we had already written a lot of material, but that particular song came about in the studio all by myself.

Has your gear changed much over the years?
I’m still using Dean guitars and my usual stuff: the Marshall amp along with a simple delay, chorus and wah-wah pedal. That’s it.

Do you ever see yourself writing a book about your life and career?
I’m a musician. I let the music do the talking [laughs].

Of all the highlights of your career, are there any that stand out to you as particularly memorable?
My life has been a journey, and I remember every step of it. Every step was an important one that led to the next one. Life is designed to bring new challenges in order for you to learn, create and make choices. I look at it the same way with my music. So if you ask me if there’s anything in particular, I’d say no.

The journey is the highlight and it fits together just like the book you were talking about. It’s step by step recognizing the development of my guitar playing and where I’m going. It’s about moving forward all the time and never looking back.