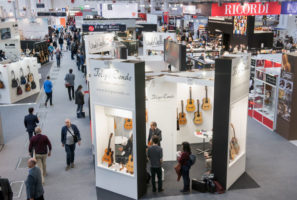 Musik for the masses: how Musikmesse and Prolight+Sound are joining forces for 2018

Running alongside Prolight+Sound each year is the Musikmesse trade fair. MI Focus editor Laura Barnes talks to Messe Frankfurt’s Michael Biwer about how the two shows are becoming more interwoven as the MI and audio markets evolve…

Musikmesse, the biggest trade fair for musical instruments in Europe, first launched in Frankfurt in 1980. Fifteen years later, Prolight+Sound was introduced to Messe Frankfurt. Running alongside the MI show each year, Prolight offered up a space for the pro audio and lighting industries to take advantage of the tried and tested formula of Musikmesse.

Traditionally, the shows have been seen as two very different beasts. While there have always been some companies, manufacturers and businesses that have dealings with the MI, pro audio and lighting sectors, for the majority of visitors, if they’re there to check out the latest guitars, the chances are, they probably won’t be interested in the latest state-of-the-art fibre optic cabling technology.

However, as technology evolves, more ‘compact’ and ‘entry-level’ pro audio equipment pops up, and MI manufacturers continue to create gear with additional professional uses, the two worlds get closer and closer each year.

Manufacturers are producing products that are increasingly appealing to both sides of the market, and Messe Frankfurt has seized the opportunity to make Musikmesse and Prolight + Sound something of an all-inclusive affair.

With the dates of the two fairs overlapping (Prolight+Sound from April 10-13 and Musikmesse from April 11-14), exhibitors can reach bigger target groups, and visitors can easily dip a toe into the other pool to seek out inspiration, ideas and make connections.

“Nowhere else in Europe will retailers find such a large number of manufacturers and industry professionals from the musical instrument, equipment and event technology sectors,” says Michael Biwer, group show director of the ‘Entertainment, Media & Creative Industries’ Business Unit of Messe Frankfurt.

So, what can traditional Prolight+Sound visitors expect from this crossover? Biwer reveals that this year there are several components that are part of both Musikmesse and Prolight+Sound that are marketed to both target groups.

“For instance, the ‘Audio, DJ + Recording’ product group, which was previously spread over several halls at the two fairs, is now being given a central presentation platform in Hall 4.1,” Biwer elaborates.

“This provides companies with the opportunity to target visitors from both trade fairs with just one stand – visitors will have less walking with this format.”

Also appealing to both fairs is the new Merchdays industry forum, and the DJCon platform for disc jockeys, both of which Biwer describes as “hybrid components”.

At MerchDays, which take place on April 12-13 during Musikmesse and Prolight+Sound for the first time, visitors have the opportunity to find out about the latest trends in the merchandising sector – from textiles, electronics and lifestyle products to finishing, logistics and eCommerce.

“The focus here is on trade visitors from the music and event industries,” explains Biwer. “This adds a further link in the value creation chain to the content of our two fairs.”

Alongside the exhibition spaces, both shows have new elements added to their conference line-ups, including A3E’s Future of Audio + Music Technology. This angle suggests an increased focus on the future technologies of both industries.

“Successful trade fair platforms not only reflect the status quo in their particular industry, they also give visitors a decisive knowledge edge,” Biwer states. “It is of major importance not only for visitors, but also for manufacturers, to be able to anticipate the direction in which the industry is travelling and where growth potentials lie so that they can use this information to adjust their business decisions at an early stage.”

There will be well over 100 lectures and seminars at Musikmesse and Prolight+Sound – some of which will give important basic insights, while others will look at the future of the industry – as the events look to up their educational output.

“These include virtual and augmented reality for studio production and live performance, wearable technologies for musicians, cloud-based DAWs, app integration for musical instruments and much more.”

Those attending this year’s Prolight+Sound will not only benefit from the crossover areas and events, but may also find inspiration and ideas from some of the musical instrument-targeted topics of discussion.

“Musikmesse is also extremely important as a platform for inspiration,” Biwer concludes.

“The Business Academy, for instance, is being held again this year. It offers this year’s attendees a professional development and training programme that is specially tailored to the MI sector with high-calibre lectures on the most pressing topics such as CITES, the new EU data protection directives and digitisation in the retail trade.”