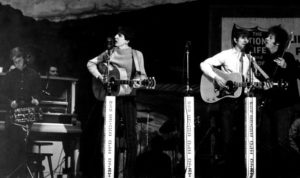 In 1968, the Byrds—a Southern California rock band that had enjoyed a series of mega-hits since 1965—set out on an ambitious path to more deeply explore country music, a genre they’d merely flirted with on their previous albums. The disc they came up with, the now legendary Sweetheart of the Rodeo, has gone down in music history as the first country-rock album to be recorded by an established rock act.

The shift was brought on in large part by the entrance of country aficionado Gram Parsons, who joined the group just prior to Sweetheart. Parsons gave the Byrds a creative shot in the arm and, in turn, his association with the band would introduce his twang and songwriting genius to a much larger audience.

Though not initially a commercial success, Sweetheart was a groundbreaking record; for the first time, a major pop act was seamlessly fusing country with rock and roll. All these decades later, the album is still hailed as a classic, and it continues to open the eyes of new generations of fans to country music.

“I think it’s undeniable. When you listen to contemporary country on the radio, you can almost trace it all back to the Byrds’ Sweetheart of the Rodeo,” country music legend Marty Stuart told Guitar World last year.

The album was recorded in March and April 1968 in Nashville and Los Angeles. The band at that time included founding members Roger McGuinn and Chris Hillman, plus newcomer Parsons and drummer Kevin Kelley, who happened to be Hillman’s cousin.

“[Sweetheart] did open up people to country music, and consequently the floodgates swung back, creating the West Coast ‘country rock’ sound,” Hillman told us in 2016. “We had some wonderful people playing with us on the album.”

That’s an understatement. The sessions were augmented by the B-bending mastery of guitarist Clarence White, plus John Hartford on banjo and fiddle, Roy Husky on double bass and Earl P. Ball and Barry Goldberg on piano. However, it can be argued that the true stars of the album—at least in terms of its “guitar” solos, were pedal steel masters Lloyd Green and Jay Dee Maness. The freshness of their playing lended some much-needed authenticity to the sessions and introduced a rocking audience to the sweet sounds of the pedal steel guitar.

Now, 50 years later, Green and Maness have teamed up to record Journey to the Beginning: A Steel Guitar Tribute to the Byrds, an instrumental tribute to Sweetheart of the Rodeo. The album, which was recorded at Cinderella Sound in Nashville, captures the spirit of Sweetheart while adding the refinement and seasoning of 50 years of reflection on the project.

The new record showcases the song-serving chops of Green and Maness as they transform 11 Sweetheart classics into lush, imaginative steel-guitar instrumentals. And with producer/engineer John Macy having the two veteran musicians hard-panned in the mix (Maness in the left channel and Green on the right), it’s easy to pick out each player’s unique and masterful pedal-steel contributions.

The album will be released on Record Store Day (April 21), and Lloyd and Maness will celebrate with a performance at Grimey’s in Nashville the same day. See below for details.