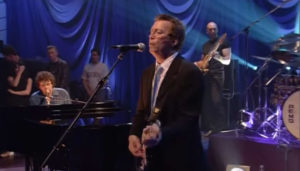 In 1971, hot on the heels of their successful debut album, 1970’s Layla and Other Assorted Love Songs, Derek and the Dominos returned to the studio to begin recording their followup disc. Sadly, those sessions fell apart—and the short-lived band’s second album never materialized.

According to Eric Clapton, the 1971 sessions “broke down halfway through because of the paranoia and tension, and the band just…dissolved.” Of course, the unexpected late-1971 death of part-time Domino guitarist Duane Allman certainly didn’t help matters.

One particularly strong track from the doomed 1971 sessions, the rollicking, Clapton-penned “Got to Get Better in a Little While,” was performed by the band during their 1970 tour and wound up on their live album, In Concert.

The studio version of the song also was released—along with several other orphaned 1971 Dominos recordings—on Clapton’s career-spanning 1988 box set, Crossroads. However, the track was annoyingly incomplete. Most (if not all) of Clapton’s parts were there, from the vocals to the emotive, wah-drenched guitar; it was, however, missing a good deal of input from Bobby Whitlock, the band’s keyboardist and co-lead vocalist. I mean, full verses were missing, as well as the all-important chorus. It was so incomplete, it was considered a “jam.” You can hear it here:

And now for the interesting part: In 2010—just in time for the deluxe, 40th-anniversary edition of Layla and Other Assorted Love Songs—Whitlock was asked to finally complete “Got to Get Better in a Little While” so it could be included on the expanded album.

So that’s exactly what Whitlock did—and the results are incredible. Best of all, despite the passing of 39 years, Whitlock still sounds like, well, Whitlock. If someone didn’t tell you his vocals were added 39 years later, you’d never know. And then there’s the recording’s incredibly crisp sound quality, which is actually pretty hard to believe, given its age and circumstances. You can check it out below.

In 2011, the whereseric.com crew asked Whitlock how he approached finishing the song. “With the gusto of 14 hound dogs in heat!” he said. “It is exactly the way I wanted to do it all those years ago. Only now it is even better because I have had 40 years to think about it.”

Sure, it’s not as historically significant as the time Paul McCartney, George Harrison and Ringo Starr added vocals, guitar, keyboards, bass and drums to two late-Seventies John Lennon demos, thus creating two new Beatles tracks in the mid-Nineties, but it’s still noteworthy, especially to Clapton fans who had a hard time dealing with the incomplete version of the song.

By the way, besides Clapton (vocals, guitar) and Whitlock (vocals, keyboards), “Got to Get Better in a Little While” features Carl Radle (bass) and Jim Gordon (drums).

Since we’re on the topic “getting the ol’ Dominos back together,” check out this touching April 2000 performance of Derek and the Dominos’ “Bell Bottom Blues” by Whitlock and Clapton. The former Dominos got back together on Later … With Jools Holland. Enjoy!