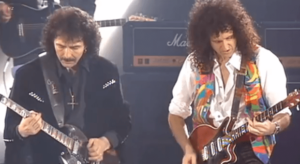 Queen, Tony Iommi and Roger Daltrey Perform "I Want It All" in 1992

We thought we’d drop in on Queen—Brian May, John Deacon and Roger Taylor—who hosted the star-studded Freddie Mercury Tribute Concert on April 20, 1992.

The show, which was witnessed by a crowd of 70,000-plus, took place at London’s Wembley Stadium.

Among the special guests that day were Black Sabbath’s Tony Iommi and the Who’s Roger Daltrey, both of whom sat in for this spirited performance of “I Want it All,” a track that originally appeared on Queen’s The Miracle (1989).