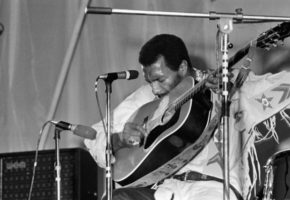 Richie Havens’ thumb fretting madness Among other honors, soulful, folky groove-meister Richie Havens (1941–2013) holds the distinction of being the first musician to grace the stage of Woodstock—1969’s legendary “Peace and Music” festival (a “counterculture” showcase of Sixties folk and rock icons like Jimi Hendrix, Santana, Janis Joplin, Grateful Dead, the Who, etc.).

Richie Havens’ thumb fretting madness Among other honors, soulful, folky groove-meister Richie Havens (1941–2013) holds the distinction of being the first musician to grace the stage of Woodstock—1969’s legendary “Peace and Music” festival (a “counterculture” showcase of Sixties folk and rock icons like Jimi Hendrix, Santana, Janis Joplin, Grateful Dead, the Who, etc.).

Originally slated to perform as the fifth act, Woodstock’s location was so remote (a 600-acre field in the Catskills region of New York), with its lone roadway jammed (400,000-plus people attended!), many musicians were running late; Havens stepped up to the plate, opened the show, and performed for nearly three hours, encouraged to ad lib until other scheduled entertainers arrived.

When his “stretching” prompted an improvised variation on the spiritual “Sometimes I Feel Like a Motherless Child,” soon dubbed “Freedom,” a legend—and timeless musical anthem—was born. (Following his 2013 passing, Havens’ ashes were spread across Woodstock’s festival site.)

Let’s examine the hallmarks of Havens’ signature sound: intense rhythmic strumming of chords in open D tuning (low to high: D A D F# A D) and thumb fretting of as many as six strings!

FIGURE 1 is “in the style” of Havens’ “The Key,” one of his final compositions (2008’s Nobody Left to Crown). We’ll use this passage to ease into Havens’ unbelievable thumb-fretting demands, using the thumb to cover strings 4–6 (bars 1 and 2), while open strings ring throughout (in Havens’ open tuning, this produces colorful chords like Bm7, E9sus4 and D/G). The final chord, Ebmaj7, will give you a taste of crazy thumb things to come, as Havens covers strings 2–6 with his long, versatile appendage, allowing only the highest string to ring open.

It’s worth noting that Havens was not only a towering musical giant, he also stood 6’6” tall and had huge hands! He also, in virtually every case, involved all six guitar strings when playing chords, using his thumb to barre—squeezing the neck with a clamping grip to fret multiple strings with one finger—anywhere from three to six strings at a time.

For us mere mortals, most of these voicings will be unplayable. To ease your pain, FIGURE 2 presents the actual chord fingerings Havens employs for grips like A, Amaj7, A7 and Am (notice he never uses his index finger), with alternate fingerings provided, so you can replicate his songs more comfortably. These are put to use in FIGURE 3, a passage inspired by the aforementioned “Freedom,” which closed Havens’ Woodstock appearance. Keep your picking hand grooving in steady 16th notes, striking the strings when indicated, and strum harder each time you see an accent (>).

Amazingly, there are even more tendon-traumatizing chord shapes in the Havens arsenal, among them the Asus2 and A9sus4 stretches shown in FIGURE 4 (again with mortal-friendly alternate fingerings). Be sure to shift these up and down the neck so that you can experience easier or more demanding stretches.

We’ll close this overview of Havens’ approach with FIGURE 5, which contains moves inspired by “Handsome Johnny” (from 1967’s Mixed Bag), which Havens used to open Woodstock. 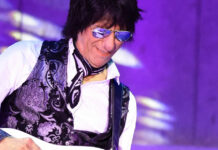